How to Make French Onion Soup 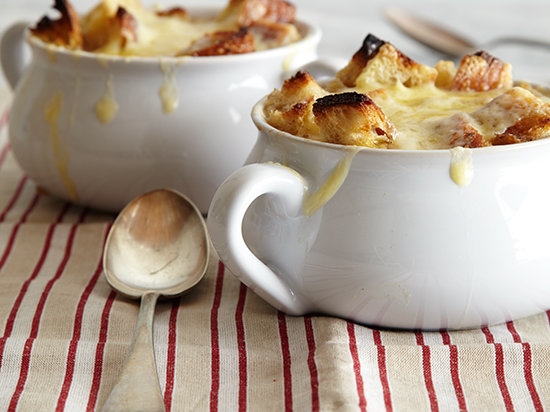 How to Make French Onion Soup

Chef Hugue Dufour makes a pork broth for his French onion soup using bacon for smokiness and a pig’s foot for richness.

In a pot, cover the bacon, pig’s foot and whole onion with the water and boil. Simmer over moderately low heat until the foot is tender, about 3 1/2 hours.

Strain the broth and return to the pot, reserving the bacon and pig’s foot.

Remove all the lean meat from the bacon and pig’s foot, cut into bite-size pieces and reserve.

Boil the broth until reduced to 2 quarts; skim off the fat or refrigerate overnight and then skim off the congealed fat.

After cooking the onions and stirring in flour, add the strained broth, ale and 4 of the rosemary sprigs and cook over moderately low heat, stirring, until the soup thickens. Add the reserved meat, and season with salt and pepper.

On a rimmed baking sheet, toss the bread cubes, melted butter, garlic and the remaining 2 rosemary sprigs; season with salt and pepper. Bake until the croutons are crisp.

Ladle the soup into heatproof bowls on a baking sheet and top with the croutons and cheese. Broil for about 2 minutes, until bubbling. Serve.