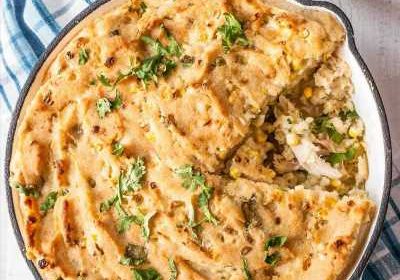 Enjoy the flavors of tamales without all of the work. Rather than individual tamales wrapped in corn husks, we made a pie! Use rotisserie chicken and canned green chiles to make the recipe even easier.

For many years, Thanksgiving weekend was punctuated by our family gathering to make and freeze tamales to enjoy on Christmas Eve.

We bought the dough from the ‘tamale lady’ who sold it from her house in a nearby town. My brother-in-law slow-cooked a pork shoulder with chiles, garlic, and onions to shred for the filling. It was a family effort; without a large cast of cooks (at least eight), it would be impossible to accomplish such a feat.

That’s why this tamale pie is such a revelation!

Layers of cheese, canned green chiles, scallions, and shredded chicken from a rotisserie bird are tucked between two blankets of dough in a skillet to make a pie. No more spreading and filling and folding and steaming! No, a pie is not quite as charming as little packets of corn husks filled with treasures, but it does require far less time. I’ll take it!

WHAT IS TAMALE DOUGH?

The ‘tamale lady’ who supplied us with the dough ground her own soaked corn, so it was still wet when ground. Then she mixed it with lard, the traditional ingredient of tamale dough.

Because few of us are going to find corn kernels that have been soaked in slaked lime and grind them ourselves, I use masa harina (the easily available corn flour) in this recipe and reconstituted it with water to make the dough. You could also reconstitute masa harina with chicken stock if you want an even greater flavor boost, but the dough is good made with water, too.

Instead of lard, I used vegetable shortening, which is more easily available. I also added butter for extra flavor.

Masa harina can be found in most supermarkets that carry Latin American foods. This is the special flour used to make the dough for tortillas and tamales. It is not the same as corn flour or corn meal. For masa harina, dried corn is first soaked in calcium hydroxide (slaked lime) and the tough coating of the kernels is removed. The kernels are then finely ground and dried again to make the flour (masa harina).

Masa and masa harina are not the same. Masa is the actual dough, and masa harina is the flour it is made from. To make corn tortillas, you must reconstitute masa harina by adding water to make a soft dough. Masa (dough) for tamales is reconstituted masa harina with fat added to it to lighten it and impart flavor, so the tamales are not leaden.

HOW TO FREEZE AND REHEAT THE PIE

The pie can be frozen after baking. Let it cool and then remove it from the skillet in wedges rather than freezing the pie in the skillet itself (so your skillet isn’t out of commission).

If you freeze the wedges in a container with a tightly fitting lid, you can pull out as many as you like at a time. They will keep well for about three months. Reheat them in the microwave.

Leftover pie can be refrigerated for up to three days and reheated in the microwave.

HOW TO SAVE TIME MAKING THIS RECIPE

Laboring for hours over a dish has its merits, but so do does finding ways to go easy on yourself when making dinner is a nightly obligation. I used a few short cuts to make this an easy weeknight meal.