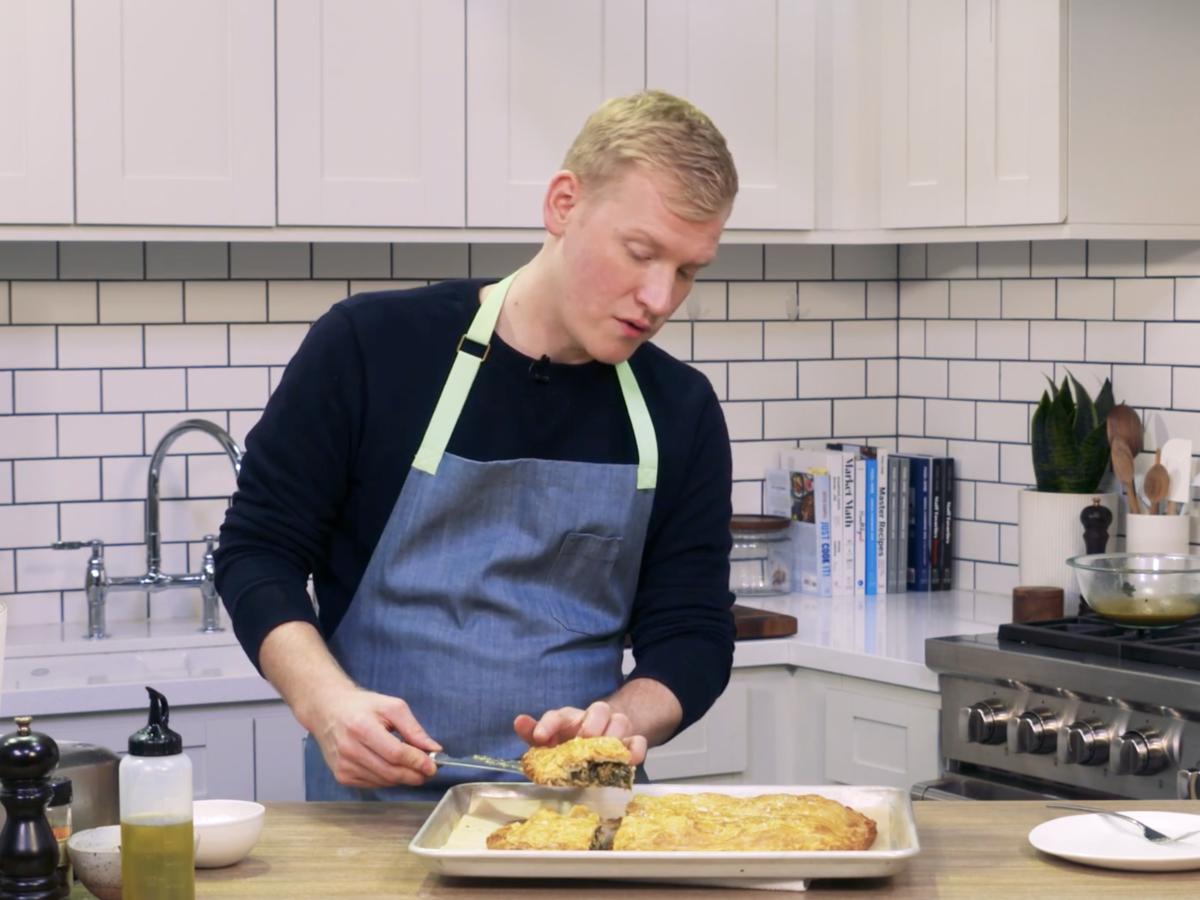 What’s the one thing in the whole world that could make creamed spinach even better? Putting it in a pie! In the latest episode of Mad Genius Tips, Food & Wine culinary director Justin Chapple shows us how to make the ultimate vegetarian side dish (or main course, if you add a big green salad). OK, so, technically spinach isn’t the only vegetable in Chapple’s creation—he also throws some collard greens in there. “The collard greens are going to give it a really nice bite,” he says, “while the spinach is going to give it that silky texture that’s traditional in creamed greens.”

Chapple sautées some onion and garlic in olive oil before adding his veggies (after they’re stemmed) one “incredible Hulk style” handful at a time—dropping in a pinch of salt every so often to speed up the cooking process. Pro tip: if you hear a boiling sound coming from the bottom of the pot, that’s a good thing. It means that liquid is being released from the greens, and they’re steaming.

The mix then gets topped with a teaspoon of crushed red pepper (“I know it sounds like a lot, but it’s really not for this,” Chapple says) and half a cup of white wine. While the veggies cool (you should stop cooking them when they’re “crisp-tender”), he gets started on the pie crust, which is where the “mad genius” part comes in.

The secret ingredient? Frozen butter! Or, butter that’s been in the freezer for about 20 minutes. Chapple grates two sticks into his flour-salt mix, and gently tosses everything together. “What you’re looking for when you grate butter into flour is you want to get these streaks or flakes in the ultimate dough,” he says. “It’s those little flakes of butter that, when it hits a hot oven, it’s going to release all of its steam and that’s what’s going to give you a nice flaky dough.”

Mad genius tip number two: since there’s nothing worse than a soggy pie, Chapple uses a potato ricer to squeeze all of the excess liquid out of his greens before they get wrapped in that buttery dough. Check out the video, above, to see how it all comes together.