A Complete Guide To Eating Oysters, Clams, And More On The Half Shell

Basically, it just means you’re eating seafood raw, not cooked. Most of the time, you’ll see oysters or clams served on a bed of crushed iced with lemon wedges, hot sauce, and a mignonette sauce (more on this later!). The top shell is popped off to reveal the meat on the inside sitting in the bottom shell. You’re meant to eat them on their own or with the condiments.

What can be served at a raw bar, and how does it all taste? 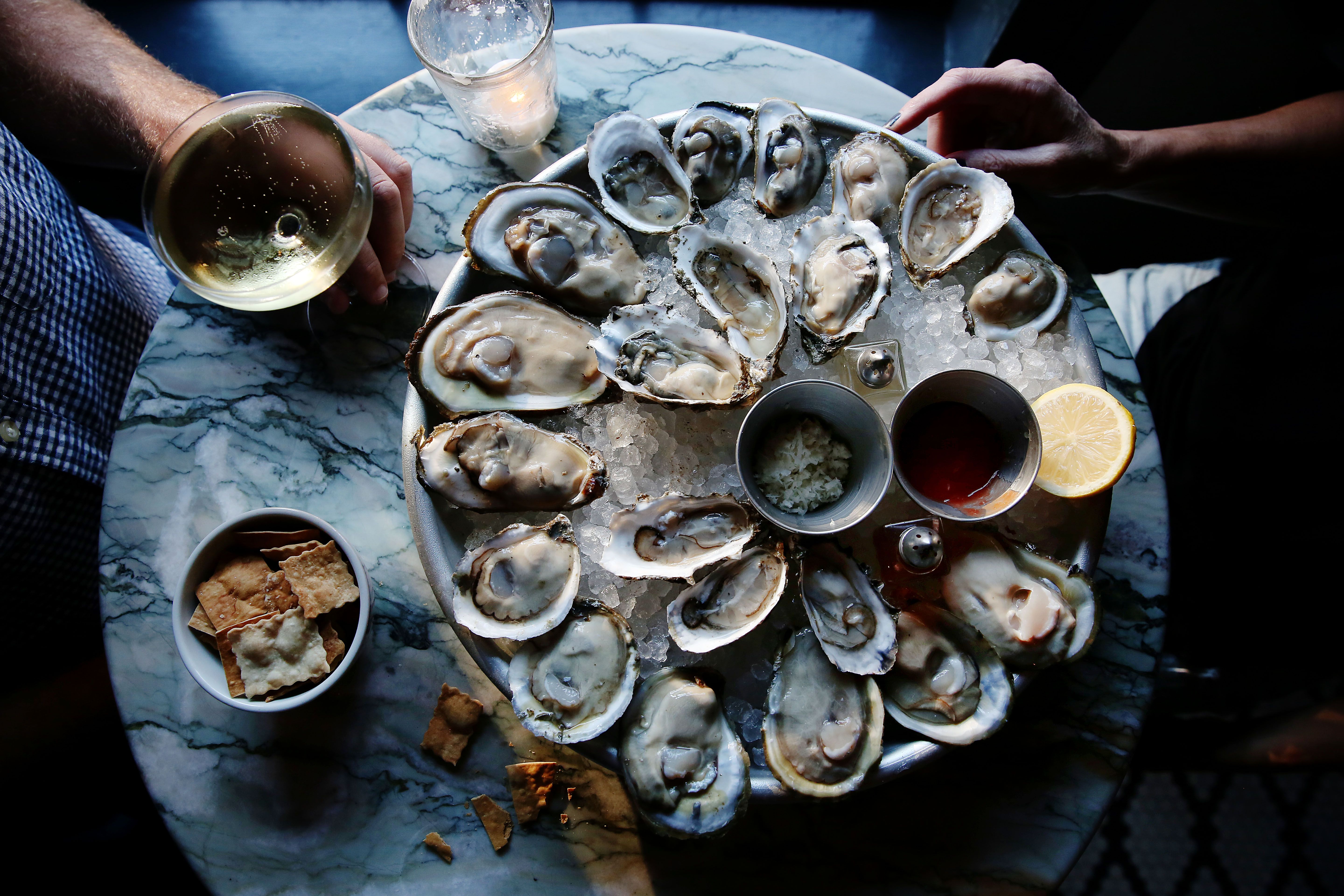 When you hear “on the half shell,” you most likely think oysters, maybe clams. But it really can be any chilled seafood. Other raw items might be crudo, sashimi, uni, or ceviche while cooked seafood like shrimp cocktail, crab legs, and lobster tails also make an appearance.
As far as taste goes, it really depends. The oysters and clams come from the sea, so you want them to taste like the ocean in a refreshing and delightful way, see: not a fishy way. But depending on where your shellfish are coming from, they will taste different. Pacific West Coast oysters, for example, will be vegetal in flavor and creamier in texture than Atlantic East Coast oysters, which are earthier and meatier. Even within smaller regions and different farms, you can taste differences.

How do I eat an oyster or clam on the half shell? 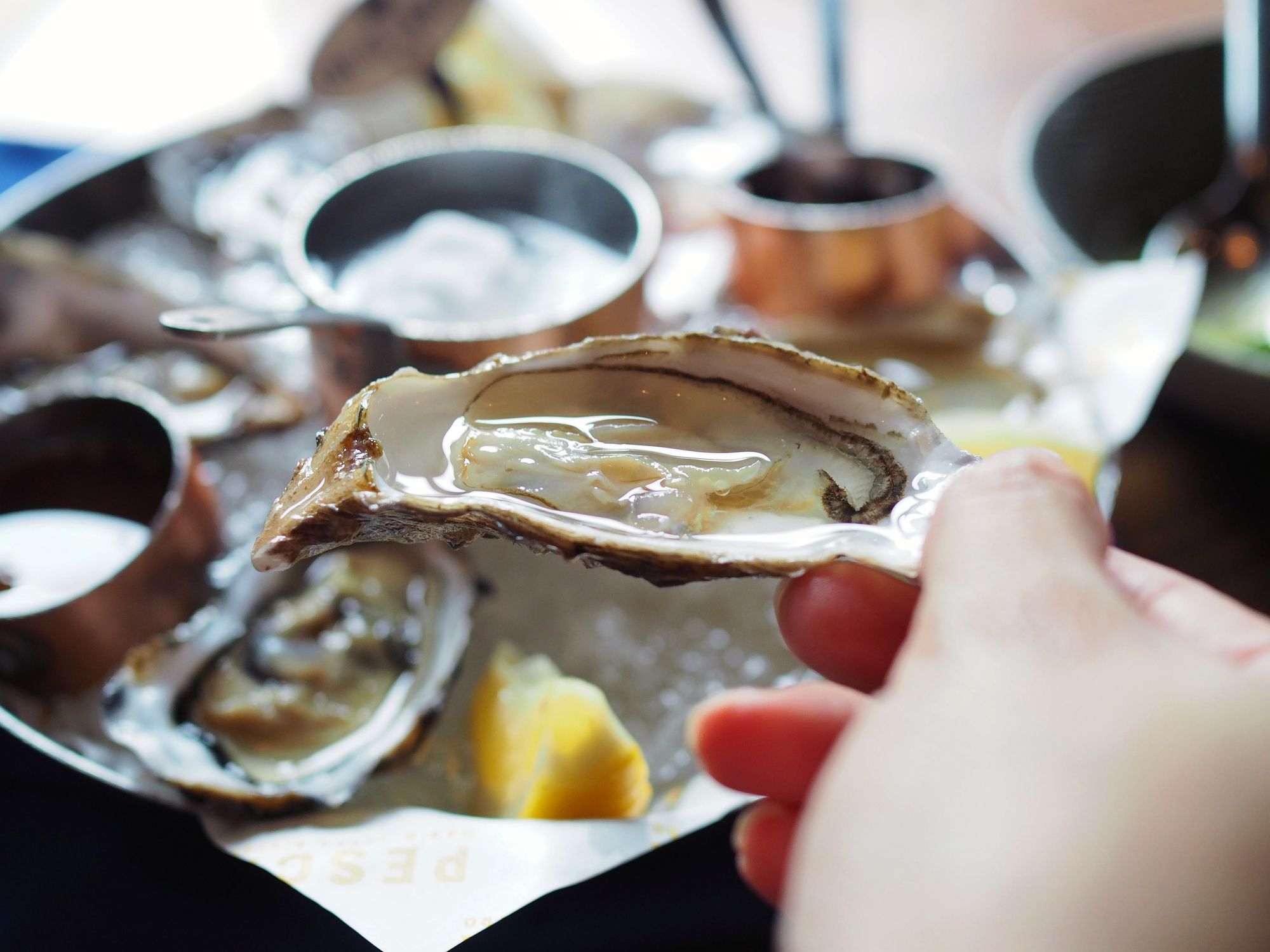 Eating them can sometimes be even more intimidating than not knowing how they will taste. A good sequence to follow is see, smell, sip, slurp, savor. Look at the shell and meat. Smell the briny and sweet—again, not fishy—aromas.As you look at it, you’ll notice some liquid in the shell with the meat. That is called oyster liquor. Sip that to get an idea of salinity. Slurp the meat down. Savor the flavor as it transitions from salty to sweet.
But to get an idea of how to gracefully swill, I spoke with Rachel Wagner, a licensed corporate etiquette consultant and owner of Rachel Wagner Etiquette and Protocol.
First off, gently pick up a shell between your thumb and first two fingers. “Now, gently tip the narrowest end of the shell into your mouth, slurping the oyster and the oyster liquor into your mouth,” Wagner said: “You may have to tip your head back a bit. The oyster is meant to be savored, so chew several times rather than swallowing it whole.”
When it comes to adding any sauces or extras, you can drink a little bit of the liquor, add the condiment, and then do your thing.

How do I shuck an oyster or a clam? 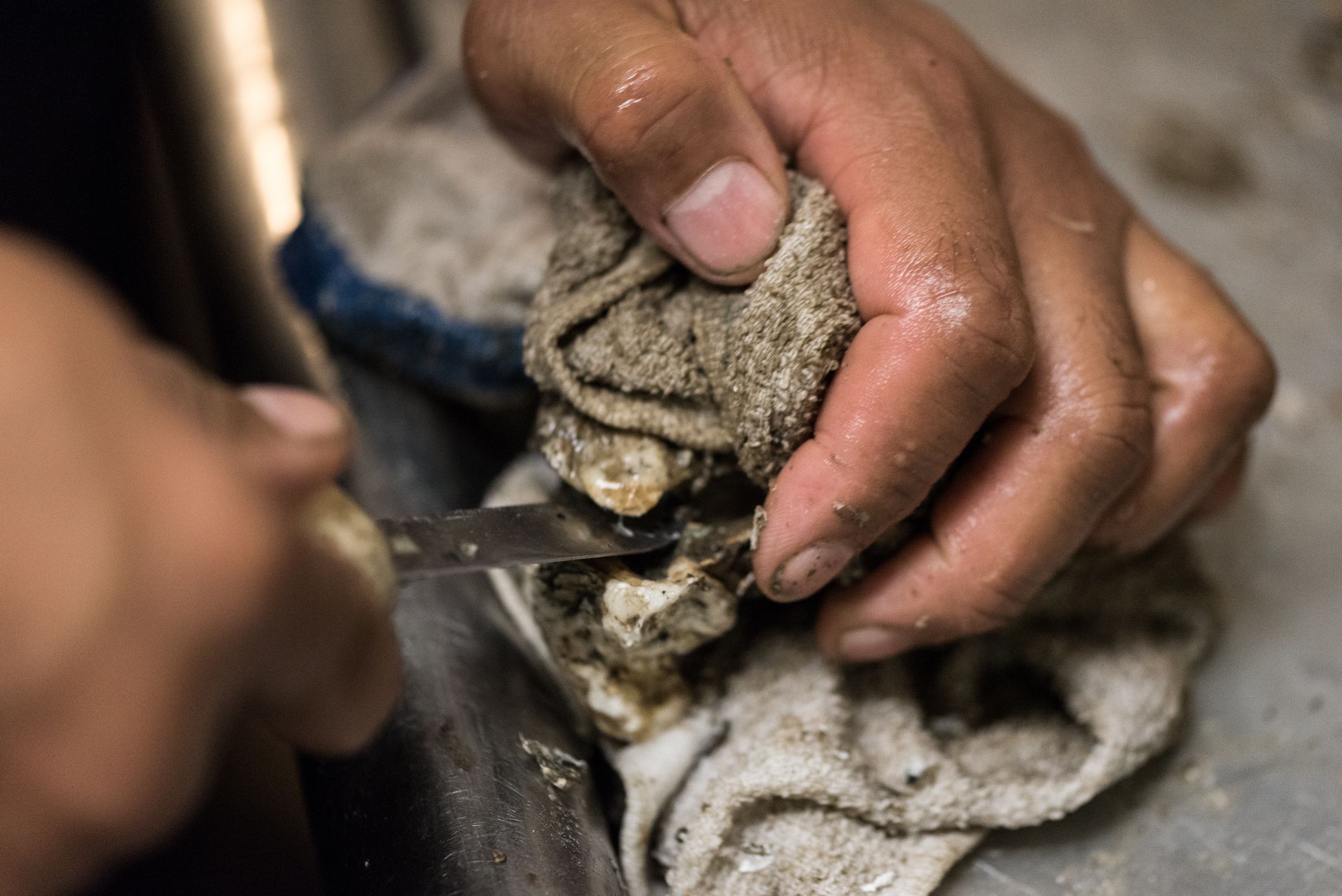 If this intimidates you, then feel free to enjoy the raw bar from the experts out at a restaurant—it can get dangerous at home. If you do insist on DIY-ing it, you’ll need a kitchen towel, an oyster- or clam-shucking knife (yes, they are different), or a dull knife, some common sense and a little confidence. Matt Griffin, executive chef and partner at Jeffrey’s Grocery, a New York City-based restaurant with a raw bar, gave me a step-by-step guide.

OK. What’s this mignonette sauce you are talking about? 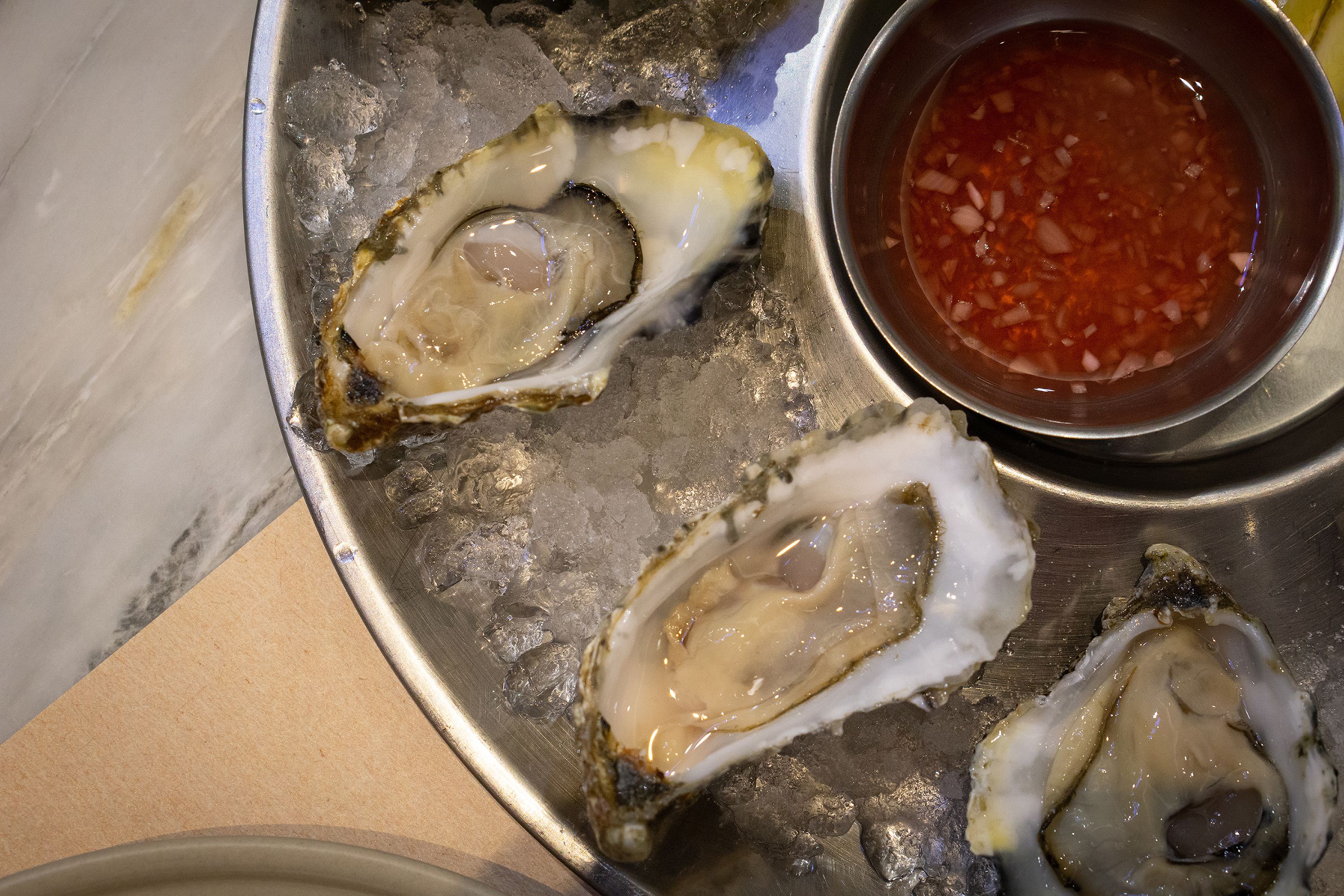 The most typical condiment is called a mignonette sauce, and it’s a combination of minced shallot, red wine vinegar, and black pepper. Spoon it on top of your meat and make magic.

How do I make this plate at home? 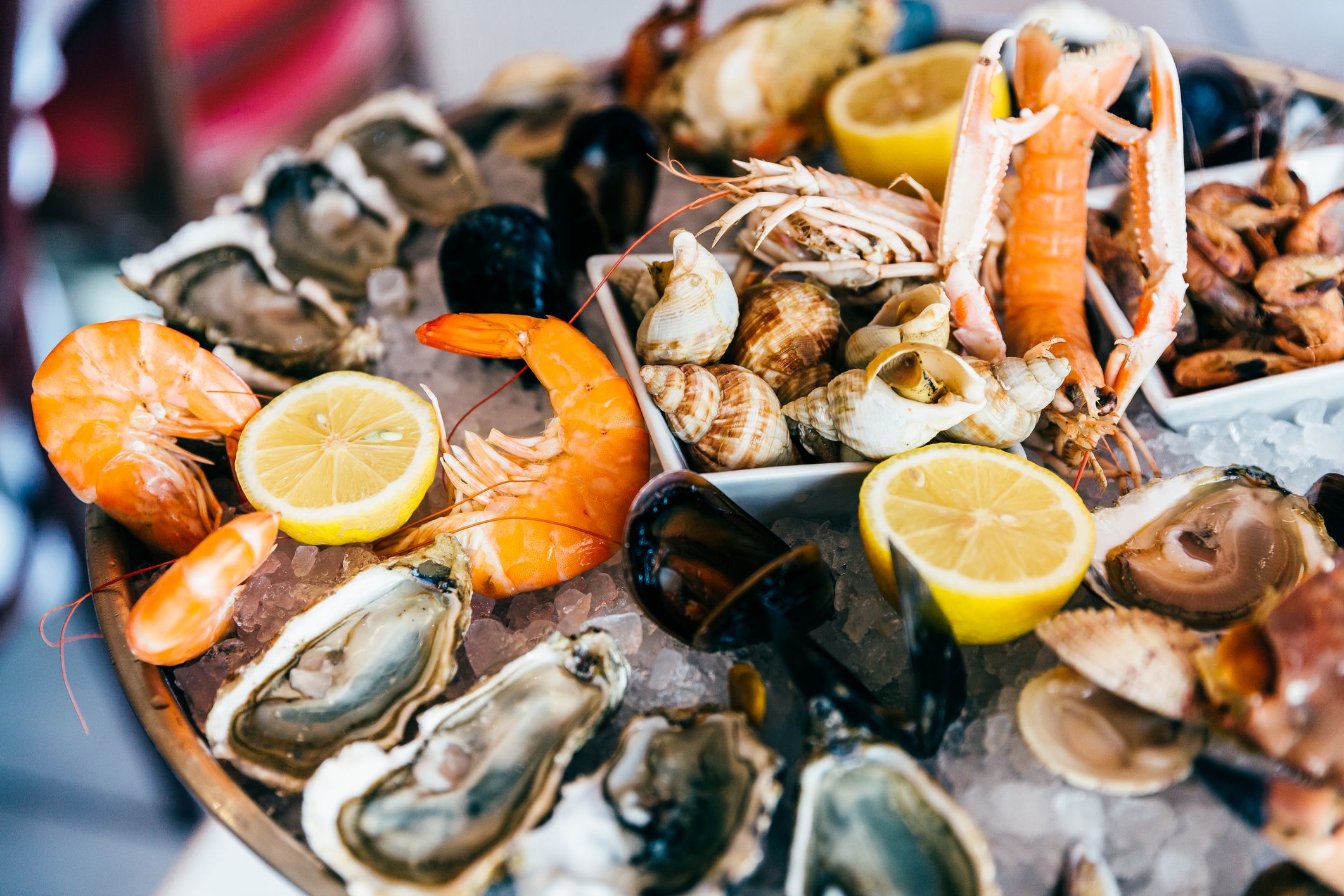 Alway keep fresh shellfish on ice. To get that crushed-ice-on-a-platter look, you can make it at home. “[In your sink], wrap ice in a kitchen towel, and then grab a hammer,” Griffin said, “but safer to buy those smaller ice cubes at 7-Eleven.”
Todd Mitgang, chef and partner at Crave Fish Bar, has an even easier solution. “You could take aluminum foil, crunch it up together and pull it apart so that it creates a little bit of crinkle,” he explained. “Put it on [a platter over regular ice], and the oysters will have success both sitting on ice and crinkled up aluminum foil.”
To get those beautifully decorated oyster platters you see at restaurants, Griffin has the breakdown. Start with a shallow platter filled with your crushed ice or aluminum foil hack:

What if I want to mix it up? Make it my own? 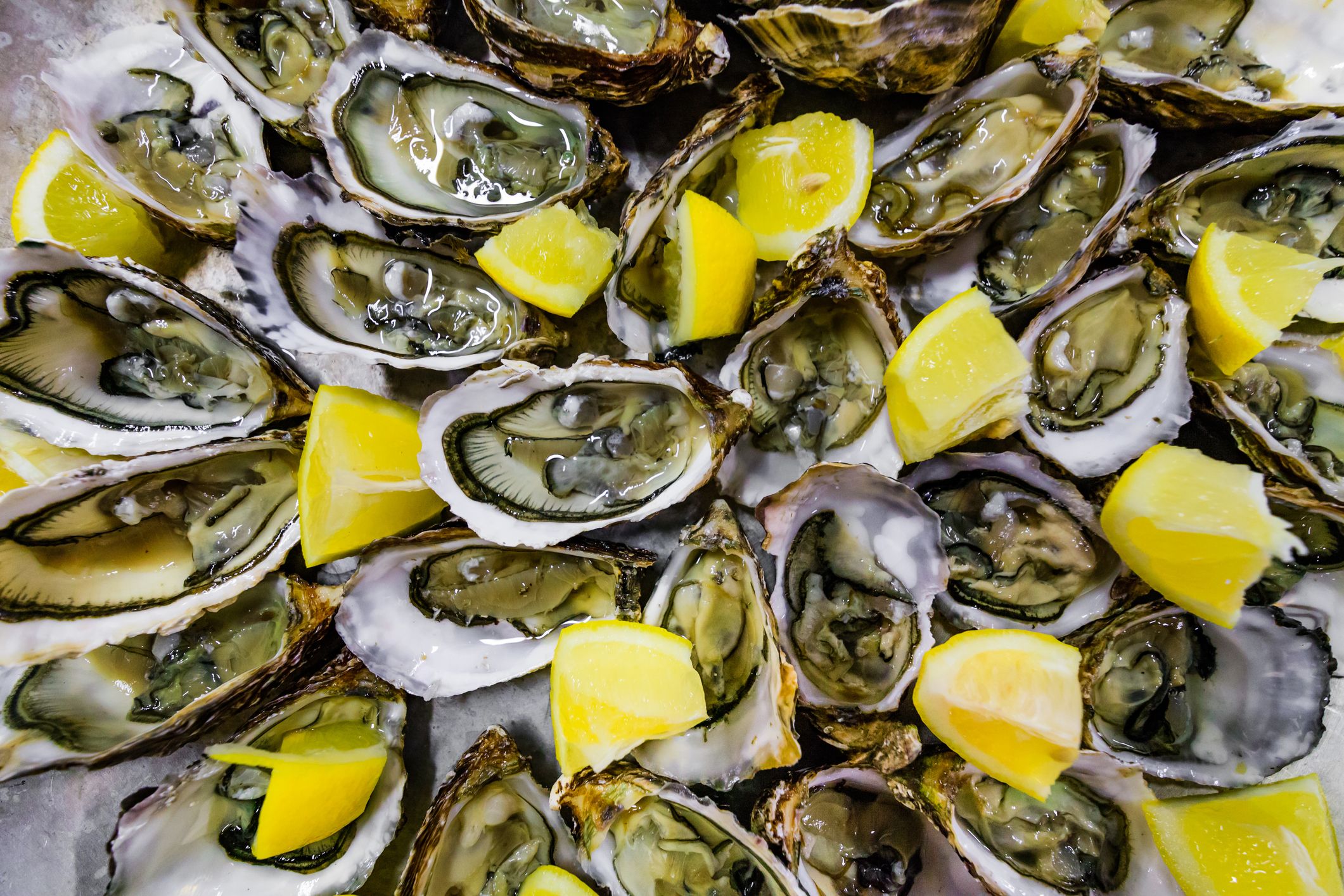 Just do it! On a basic level, you can swap out the lemon for other types of citrus like grapefruit or lime. “All the citrus represents is that acidity. Why would an oyster not pair well with some grapefruit juice?” he said. You could riff on the traditional mignonette sauce and try other vinegars and spices or replace the shallot with a green onion.
“At Jeffrey’s, we smoke our own mussels and toss with a sherry vinegar-spiked herb pesto,” Griffin said. “Visit the canned fish aisle at your grocery store. Smoked mackerel or even Alaskan salmon can work.” Got money to burn? Throw on a spoonful of caviar.

What should I be drinking with all of this, though? 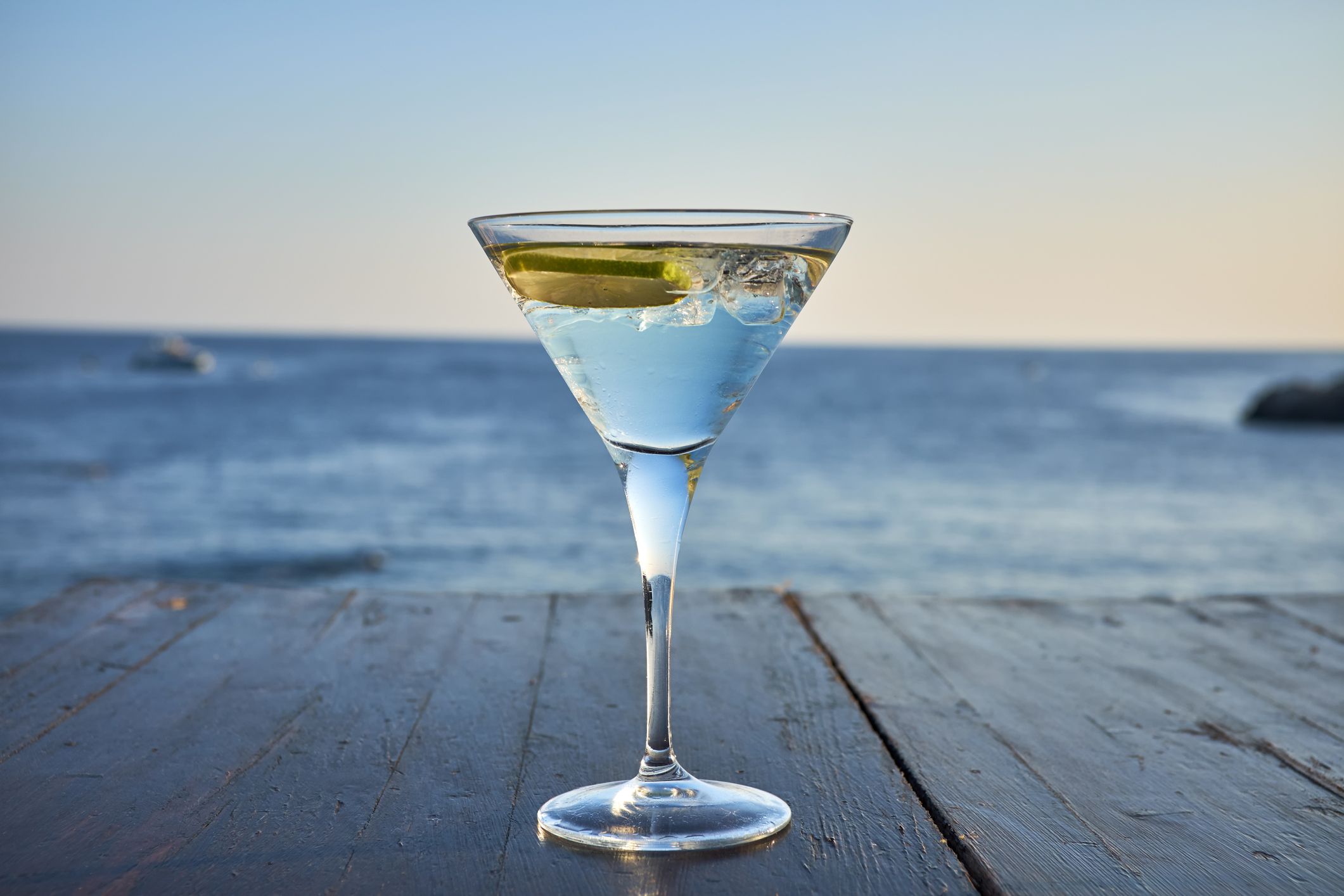 Anything else I should know? 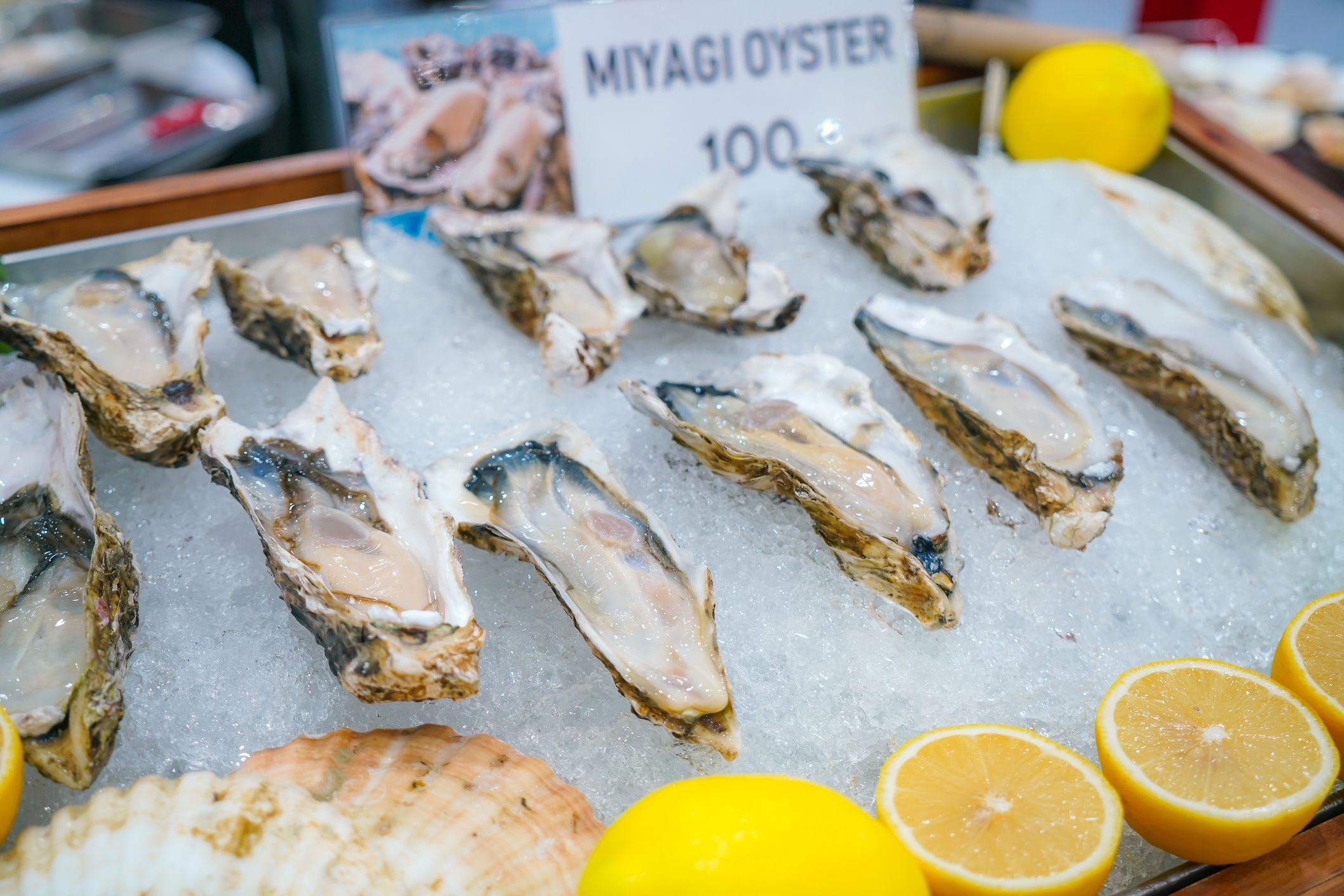 When in doubt, ask your fishmonger where your seafood is coming from and how that will impact the taste. And get to swilling! 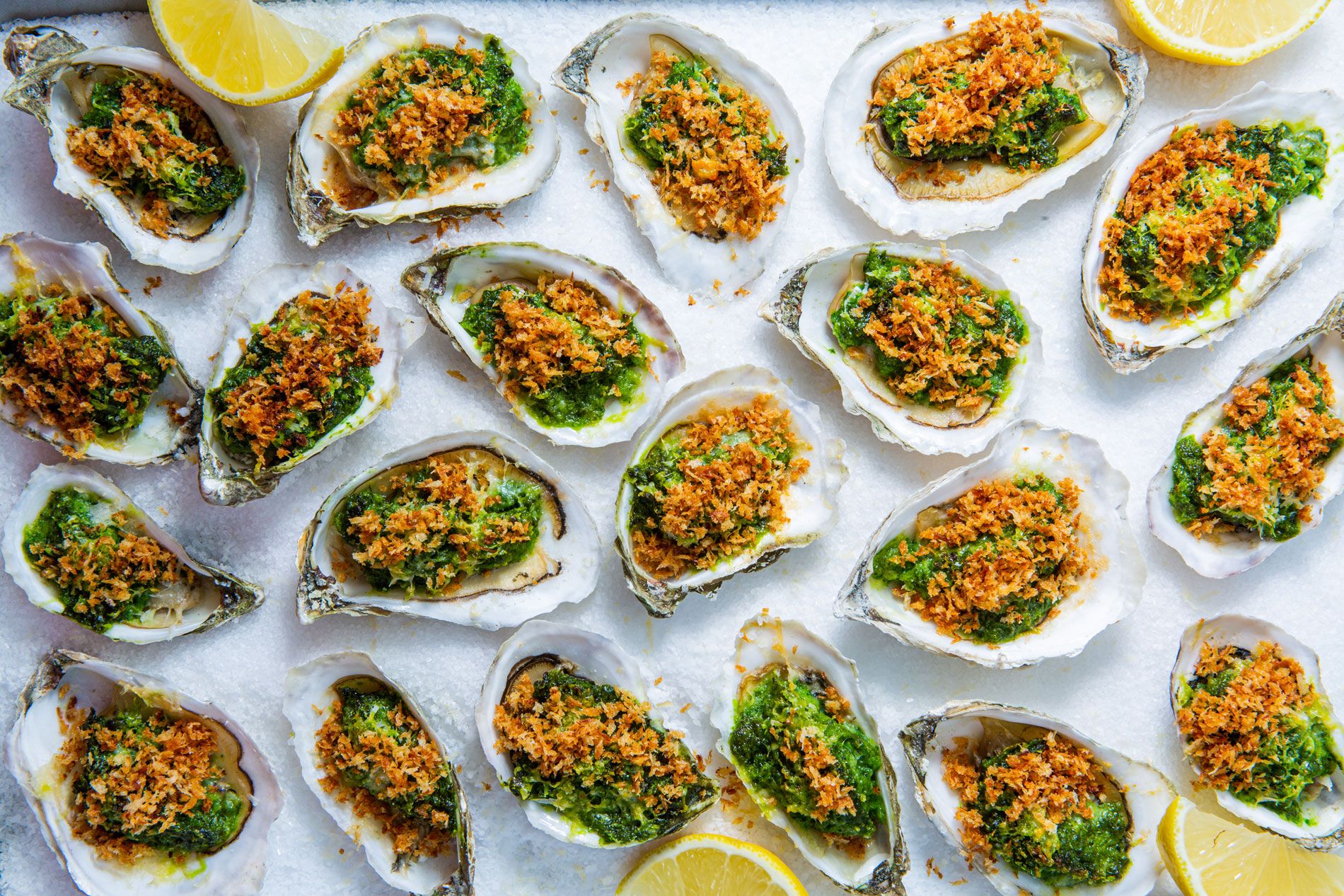 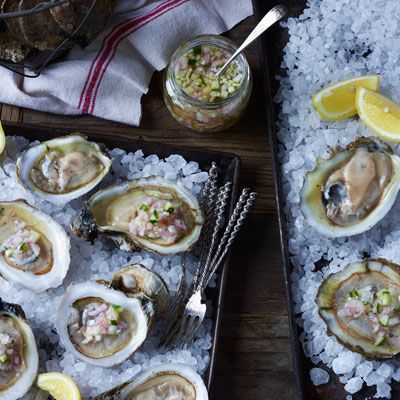