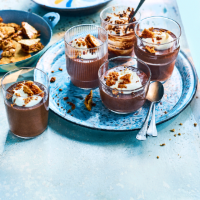 1. For the honeycomb, line a deep roasting tin with parchment. In a large, deep pan, boil the glucose, honey and sugar until light golden. Mix in the bicarbonate of soda. It will start to aggressively bubble and rise. Pour immediately into the tin; set aside to harden.

2. For the mousse, you will need 4 separate mixing bowls. In the fi rst bowl (which should be heatproof ), melt the chocolate with the orange zest set over a pan of simmering water, ensuring the base does not touch the water. In the second bowl, whisk the egg whites to soft peaks. In the third bowl, beat the double cream with the ground cardamom to stiff peaks. In the fourth bowl, whisk the yolks, then add the sugar and whisk until it has dissolved.

3. Cool the melted chocolate slightly before folding the egg yolk mixture through it. Using a spatula, gradually fold the egg whites into the chocolate mixture in small batches, then do the same with the double cream until completely incorporated. Spoon into glasses or jars and chill for at least 2-3 hours, or overnight. When ready to serve, top the mousse with dollops of crème fraîche and some of the honeycomb, broken into pieces and scattered over the top. Any extra honeycomb can be kept in an airtight container in a cool, dry place for up to 24 hours.