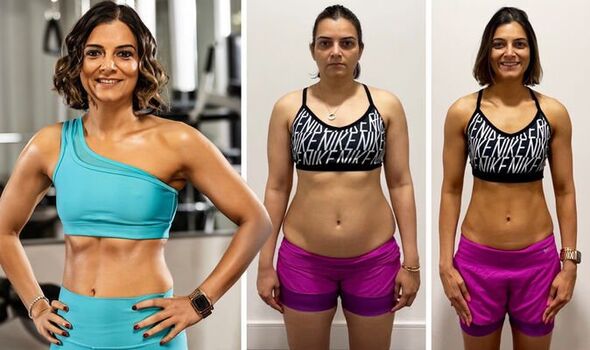 New mums are under a lot of pressure to “bounce back” to their pre-pregnancy weight, despite having spent the last nine months growing a human. As a result, their bodies experience many changes – not just how it looks, but how it feels and functions. For Ritika Langer, 39, from North London, when she felt it was time to step back into the gym, she turned to Ultimate Performance (U.P) to help her out. After following a bespoke diet and fitness plan, Ritika has lost 1.7st (11.3kg) of body fat.

When asked what prompted her to go to U.P instead of other fitness companies, Ritika explained how being pregnant and giving birth during the pandemic had really taken its toll, and she would cringe at her body when she looked in the mirror.

“I saw a celebrity on Instagram that had completed a transformation challenge and was excited by the prospect,” she said. “I Googled ‘Body transformation London’ and UP came up on my search.

“I joined UP four months post-partum and was the heaviest I had been in my life.

“I have always had a slim body but being pregnant and giving birth during a pandemic really took its toll. I was eating a lot of rubbish and I didn’t recognise myself.

“Body image is really important to me and I found that it had really impacted my confidence,” Ritika added.

In terms of what her physical and mental state was like before she started training, she revealed: “I had lost confidence in myself and didn’t know what type of exercises I should be doing.

“My diet was all over the place before starting at UP. I had been programmed to believe that fats and carbs were the enemy, so would cut them out for four to five days and feel perpetually hungry.

“I would find myself binging at the weekends on takeaways because I didn’t feel satisfied. I had no real structure or nutritional knowledge.”

So was there a particular ‘lightbulb moment’ where Ritika thought to herself: ‘I have to change?’

She said: “When I saw that a female celebrity on social media had completed a transformation after giving birth it made me believe that it might be possible for me too with a bit of help.”

As for whether Ritika had ever done weight training before she revealed: “I was much more of a cardio person (running and spinning). I had been to a few gym classes but there was no focus on understanding the equipment and technique.”

As previously mentioned, Ritika was only a few months post-partum when she started training, and she had had a Caesarean, so did this leave her feeling nervous?

Ritika said: “I got the all-clear to start training 12 weeks after giving birth.

“But I was aware that my body had undergone massive abdominal surgery (twice), so there were certain exercises that scared me.

“My trainer assured me that with the correct technique you will strengthen rather than damage your body, and now I feel like a pro.

“Picking up heavy weights doesn’t intimidate me anymore and that’s a great feeling.”

Ritika trained with Marianne who devised a training plan bespoke to her body and goals.

Ritika explained: “The focus was on full-body weight training and Marianne built me a bespoke plan to build my strength up gradually. With each exercise, we worked on nailing my technique and then increased the weights week by week.

“We had some dumbbell exercises like chest press and split squats and some machine-based exercises such as leg press and hamstring curls.

“I was apprehensive about what my body would be able to do, but Marianne only introduced new exercise when she felt I was confident and strong enough.”

For any other woman who has recently given birth and is wondering whether weight training post-partum hurts, Ritika said: “Physically it takes a lot of hard work, but at no point did it feel painful around my scar.

“I was a bit apprehensive when I did glute bridges for the first time but Marianne put me at ease.

“The training never became ‘easier’ as my trainer was always challenging me and making my plan harder. That being said, my body did get used to the movement patterns and lifting weights and I grew to love it.”

As for the changes to her diet, Ritika revealed: “One of my biggest lessons from UP is that without balanced meals a ‘diet’ won’t be sustainable. I am no longer scared of carbs and fats because I know that my body needs them for my health and performance.

“I use the UP app to track my meals and enjoy planning out my week to hit my nutrition targets.”

A typical day of eating for Ritika may include:

But that’s not all she achieved: “My confidence has definitely improved, and I feel like me again. I have more energy for work and for my family which is the most important thing.

“I also do feel my overall posture has improved,” she added.

“I am the strongest I have ever been and am very proud of being a fit mother. I feel like a completely different person. My confidence and physique have improved hugely, and I feel like the best version of myself for my family and workplace.”

Before embarking on a fitness and diet overhaul, please seek advice from your GP or medical professional if you have just given birth.