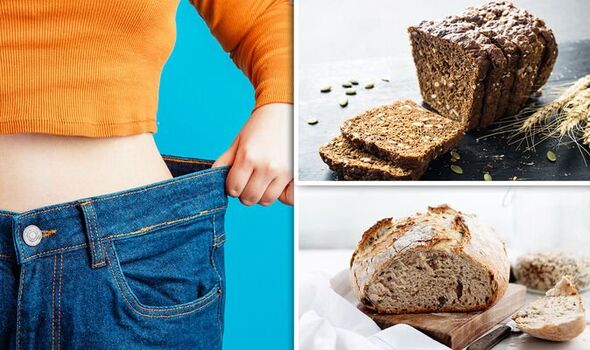 Bread is one food that many cut out when they go on a diet. However, certain varieties of bread offer a wide range of health benefits and can contribute to weight loss. While it is physically impossible to “spot reduce” belly fat over other areas of body fat, visceral fat – the type of fat found in the abdominal region around organs – can be influenced by diet changes. To add to this, research has found bread with high fibre content helps keep someone fuller for longer.

Rye bread is made with rye flour, which comes from a wheat-like plant.

It is high in iron, potassium, calcium and zinc, and dense in fibre.

Rye bread is also lower in fat and contains less gluten than wheat, which makes it a denser, heavier loaf.

In a recent study researchers from the Chalmers University of Technology in Sweden discovered that rye bread is the best bread you can consume for weight loss as opposed to plain brown bread.

The study recruited 242 overweight males and females between the ages of 30 and 70 and divided them into two focus groups.

They both consumed the same energy level from the foods.

But the group who ate the whole-grain rye bread lost on average 2.2 pounds (1kg) and reduced their body fat by 0.54 percent.

Scientists think that the high fiber content inside rye bread keeps individuals fuller for longer than those who eat the same amount of wheat bread.

Claire Barnes, a Nutritionist at Bio-Kult explained: “Fibre plays a key role in regulating our appetite, basically it helps keep us feeling fuller for longer, therefore reducing the need to snack. As fiber-rich foods tend to be low energy density, this means that you can eat larger amounts, with fewer calories.”

If you’re not a fan of rye bread, there are other breads that are high in fibre that can be eaten as part of a healthy diet.

Also known as wholemeal, unlike white bread, it’s made from a more unrefined flour, is higher in fibre and has more vitamins and minerals.

It also is much lower on the GI index than white bread, meaning eating wholemeal will leave you feeling fuller for longer – ideal for anyone on a diet.

Sprouted grains became popular with the rise of gluten-free diets.

While sprouted bread is not gluten-free, it is often touted as more digestible due to the grains being “sprouted” before germination.

Most sprouted breads are also high in fibre and protein.

As such, they are more filling than other refined breads making them a great option for anyone on a diet.

Sourdough bread made a comeback during the pandemic as many took to the kitchen in an attempt to kill time by baking.

Sourdough bread’s nutritional value has been long-recognised by health experts.

It is made through a fermentation process that relies on naturally occurring yeast and bacteria to make the bread rise.

Sourdough may also be easier to digest than other breads, possibly due to its prebiotics, as well as the probiotics created during the fermentation process.

Probiotics are healthy bacteria found in your body and certain foods, whereas prebiotics are non-digestible fibres that feed these bacteria. Getting enough of each promotes good gut health and digestion.

Opt for wholemeal sourdough if you’re looking for a high-fibre option.