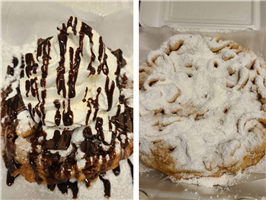 If you’re the kind of person who lives for state fairs, 2020 has obviously been a bit of a down year. That means no crazy foods to check out, not to mention a lack of favorite carnival confections like funnel cake.

So it’s probably not too surprising that the funnel cakes served by Kenya Congress, a self-described “Funnel Cake Queen” in Decatur, Alabama, have been selling like, well, hotcakes. What’s more important than that, however, is how Congress has used her own success selling carnival snacks to help out her community in a time of need.

According to AL.com, the altruistic Congress has been slinging funnel cakes since 2018, initially in an effort to raise money for a temporary shelter for homeless women and children that she helped open. While Home of Grace eventually had to close, the cast-iron skillet-made funnel cakes she sold in the parking lot of a shopping center to raise funds for the shelter were enough of a hit to encourage her to keep going.

Restarting operations out of a local deli in February, Congress’ funnel cakes were such a hit that she outgrew the space within a matter of months, opening up her own space for Funnel Cake Queen in June, in the midst of a pandemic that’s otherwise devastated the restaurant industry. Now, AL.com says people can wait in drive-thru lines up to an hour for funnel cakes with all manner of topping, available in “contessa,” “princess,” and, of course “queen” sizes.

WATCH: How to Store Flour So That It Lasts Longer

The most important part of Congress’ success is her commitment to paying it forward. Recently, she posted on social media asking customers what bill they’re worried about paying—and amidst Covid-19, there were plenty of responses to go around. Soon after, AL.com says Kenya gave out nearly $2000 the following day to help out Alabamans who’d fallen on hard times.

To the Funnel Cake Queen herself, the spirit of giving is more important than hoarding profit—especially when booming business enables her to pay her blessings forward.

“We were so busy the next day, I didn’t even miss [the money],” Congress told AL.com. “Helping people is my heart. To be in a place where I can give back, it does something to my heart. I’ve been there.”

So amid all the dark moments this year for both struggling individuals and restaurants, it’s good to know that there are at least some small examples of businesses who are managing to not only hang on, but make a positive impact. It’s safe to say both people and restaurants still need some state and federal support to survive these difficult times, but at a time like this, every little bit we can share will help.