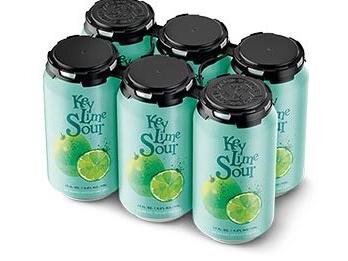 Summer 2020 has been (both figuratively and sometimes unfortunately literally) hot garbage. Everything from music festivals to grad parties and beach barbecues have been cancelled, forcing us all to improvise our leisure activities in an effort to stay sane. Really, all there is left to do is drink beer, which the virus thankfully hasn’t taken from us yet.

If you’re in the mood for something a bit unorthodox and happen to live next to a participating Aldi location, you might want to take some sweet sips of the Key Lime Sour that’s been spotted on the store’s shelves as of late.

Where are my key lime people at?! 🙋🏻‍♀️This sounds freaking DELICIOUS to me!!!😋 Key lime sour?! Yes please!! These were $6.99 for 6 in the normal alcohol section!

Based on an attempt to read the bottom of the can, the Key Lime Sour is an “ale brewed with key lime juice”. That means it should probably pack more than enough acidity and sourness— perhaps even more— than you’re used to from similarly-classified beers.

Though this seemingly unbranded beer has the aesthetics of something you might find brewed by Dogfish Head, a little bit of digging reveals it’s brewed by State of Brewing, which is in turn a subsidiary of Waunakee, Wisconsin’s Octopi Brewing. They seem to have generated a mixed 3.46 rating on Untappd (essentially the Yelp of drinking beer), with at least one reviewer directly comparing it to a similarly limey Dogfish Head brew. Someone who wasn’t a fan simply described it as “yes sour,” though, so it definitely lives up to its name for better or worse.

The good news is that a six pack retails at Aldi for just $7, so it’s definitely the kind of beer you can purchase on a whim without breaking the bank. Its 4.5% abv also means that you can try a few to form a definitive opinion on the unorthodox brew without passing out.

So if you don’t know how to bake a key lime pie or you just need to drink something different to sweeten up the dog days of summer, you could probably do worse than this. At the very least, you’ll remember drinking this for the first time more than you will your hundredth White Claw of the summer.