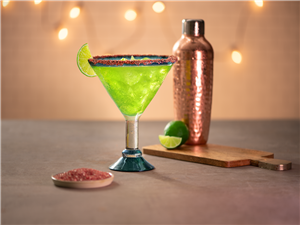 Though you’re probably only there if you happen to be in the mood for seafood, Red Lobster offers much more than just the catch of the day. You only have to spend a minute talking to a hardcore fan of Cheddar Bay Biscuits to be convinced of that. Now, thanks to a partnership with PepsiCo that’s manifested in a strange and surprising form, it sounds like those biscuits can now be paired with a signature fluorescent cocktail.

Folks, get a load of the DEW Garita, which, unsurprisingly, is exactly what it sounds like. Made using what a press release refers to as a “top-secret recipe” (which definitely isn’t just MTN DEW and tequila with what looks like a wedge of lime and some Old Bay around the rim), this is pretty much the kind of drink you’d make in your college dorm if you had access to the proper stemware.

It’s worth also pointing out that this is technically the first “official” MTN DEW cocktail, though come to think of it I can’t really recall seeing the neon green soda featuring in any cocktail on any menu I’ve ever encountered. It’s probably because it’s a sugar bomb full of caffeine and mixing alcohol with this stuff is kind of like pouring gasoline on a fire—though I imagine it tastes at least slightly better than that. Simply put, you’re probably going to need a Driftwell after sucking done one or two of these.

For Red Lobster and PepsiCo, this is possibly just the first of many collaborations between the seafood chain and soft drink brand.

"Red Lobster is thrilled to work with PepsiCo, not only because it has a great portfolio of brands, but specifically because of the food and beverage innovation possibilities," Nelson Griffin, Senior Vice President and Chief Supply Chain Officer at Red Lobster, said in the press release. "The DEW Garita is the first delicious taste of the types of inspired menu items to come."

So if you ever wanted someone to professionally make you a cocktail starring green soda, head on down to your local red lobster, where you can find the DEW Garita in select markets starting this month (September). You’ll find it at Red Lobsters (or is the plural Reds Lobster?) nationwide by the end of the year. There’s no word on how this pairs with actual lobster, but I can only imagine that a highbrow meal and a highbrow cocktail would make perfect partners.