IKEA Is Selling a Self-Assembly Chocolate Bunny for Easter 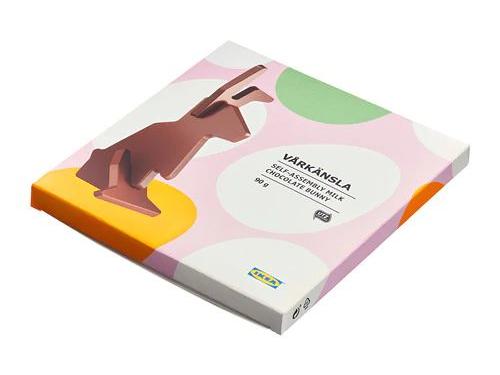 Anyone who’s ever made a trip to IKEA before knows that you have to assemble pretty much anything you buy there on your own. And while food products are usually the exception to the rule, IKEA is changing that this Easter with their new self-assembly milk chocolate bunny.

Unlike other Easter treats, which come fully put together so all you have to do is take a bite, IKEA’s version of the chocolate bunny comes in one of their signature flat boxes, and you have to build it yourself before eating it. Luckily, there are only three pieces to assemble and no chocolate screws or hardware, so this should be your easiest IKEA project ever. Based on photos, it looks like the three pieces should just slide together to make a cute, 3-D chocolate bunny.

And, true to form, IKEA isn’t calling this candy just a chocolate bunny. They’ve named it the Vårkänsla, following their tradition of calling all their furniture and products by a Swedish name. And as a fun early Easter egg, “Vårkänsla” doesn’t translate to “chocolate bunny” in English. Instead, it means “excitement of spring,” or “spring feeling,” which is exactly what chocolate bunnies to represent to us, and anyone else tired of winter.

The Vårkänsla chocolate bunny is listed on IKEA’s website for $4.29 right now, but unfortunately, you can’t order it online. It should be available in stores now, so it looks like a trip to IKEA is in order!