Bakers Are Obsessed With This $13 Digital Kitchen Scale 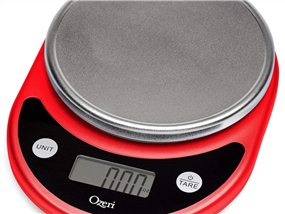 If you've learned to make bread over the course of the past several months, you're certainly not alone. Whether you've been working with sourdough starters or more advanced techniques, even the most seasoned bakers have likely encountered some obstacles on their journey toward the perfect pandemic loaf. Breaking up dough into several uniform pieces can be an especially pesky task: The fear of unevenly cooking a batch of rolls or loaves is very real, and it becomes all the more likely if they're not each the same weight.

Put simply, every home baker needs a great kitchen scale, but you don't have to shell out major cash to invest in one. The Ozeri Pronto Digital Multifunction Scale has received the approval of more than 32,000 satisfied customers, and it's on sale for just $13 right now. The compact scale can weigh up to 11.24 pounds with precise graduations of just .05 ounces or 1 gram. Its user-friendly design features only two buttons: The "unit" button instantly converts weights between five units of measurement, while the "tare" button turns the scale on and off and calculates the weight of your ingredients by subtracting the weight of a container or bowl. Just when you thought it couldn't get any easier, the Ozeri Pronto is powered by two AAA batteries, which come included in every purchase.

Amazon shoppers have given some seriously glowing reviews of this scale, citing its accuracy as its most noteworthy feature. "For the first time since baking homemade bread, all of the various loaves had basically the same pre-baked weight and came out looking approximately the same size, too" one reviewer wrote.

Others have praised the scale for its versatility beyond baking. "Measures very light things in the gram or ounce range, up to several pounds of potatoes," said another reviewer. "A great all-around kitchen workhorse."

Even if you get over your sourdough phase someday, the Ozeri Pronto Digital Multifunction Scale is a kitchen staple you definitely won't regret buying. Grab it for its discounted price while you still can, as there's no telling how long this deal will last.