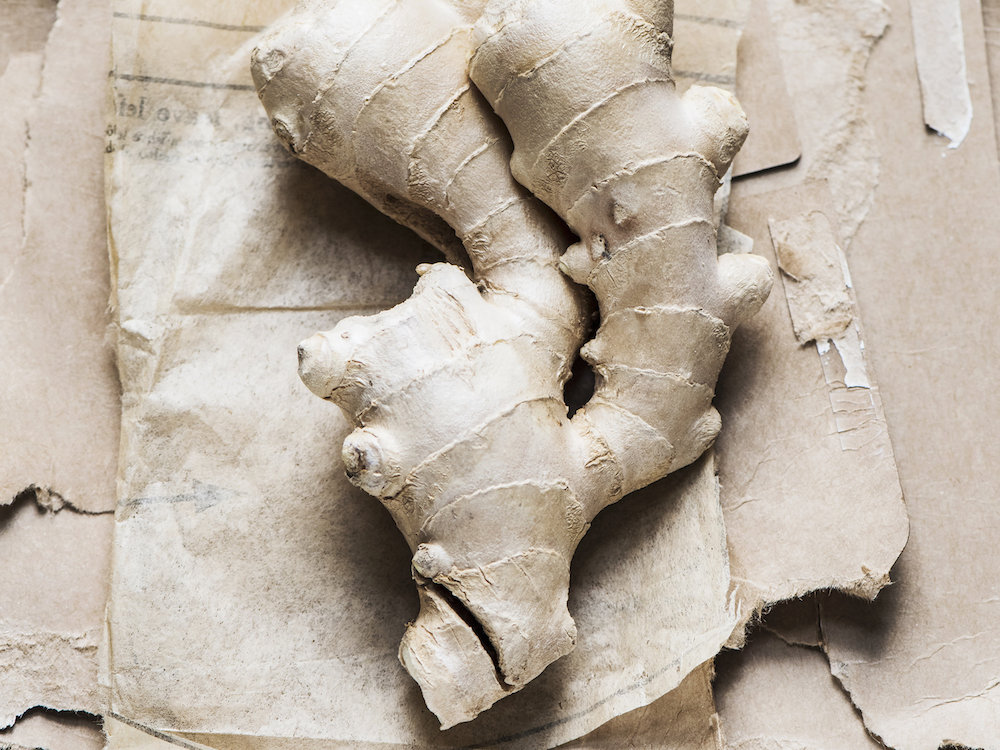 In the kitchen, we’ve long used ginger—in anything from ginger molasses cookies and ginger tea to Indian- and Asian-inspired dishes—as a flavor-agent. But in addition to being one of the most delicious and distinctive spices on the planet, ginger root has long been touted as a panacea for an array of health concerns. Today, the health benefits of ginger are becoming more recognized by both Western medicine practitioners and the wellness-minded among us with anecdotal evidence.

Nutritionally, the spice is a star. In a whole cup of chopped fresh ginger root, you’ll find just around 80 calories, less than 18 grams of carbohydrates, and about 2 grams of fiber and protein. Toss in a tablespoon to a recipe and you’re adding less than 5 calories, which is why Keri Gans, RDN, certified yoga instructor and owner of Keri Gans Nutrition, says, “ginger is used in such small amounts and is so low in calories that it doesn’t ever offer high quantities of calories, carbs, or sugar.” Each zingy bite of ginger also contains vitamins and minerals like iron, vitamin C, potassium, magnesium, and zinc.

While the root itself may look intimidating, don’t let yourself be turned off; ginger is actually available (and beneficial) in many different forms. “Ginger can be used fresh, dried, powdered, peeled, or as an oil, chips, or juice,” says Gans.

If its flavor and nutrient profile aren’t enough to send you running to the farmers market or grocery store, perhaps the health benefits of ginger will. Read on to learn more about how ginger can boost your well-being.

Ever been told to pop a ginger lozenge during an especially bumpy car ride? That’s because ginger can help calm an upset stomach. Research suggests ginger can remedy nausea from travel, pregnancy, or even chemotherapy, says Julie Upton, RD, co-founder of Appetite for Health.

In fact, one Thai study found that ginger worked as well as dimenhydrinate (the active ingredient in over-the-counter motion-sickness meds) at preventing and treating nausea in pregnant women.

However, “because ginger has so many bioactive compounds, if you have medical conditions or are pregnant, you should alert your health care professional that you are taking ginger and how much,” Upton says.

It may reduce bloat, gas, and constipation

Ginger might also relieve other GI issues, thanks to its digestive enzyme called zingibain that helps the body break down protein. The compound potentially helps the food you eat pass through your system more easily–and, in turn, reduces the bloat, gas, or constipation you’re experiencing.

But when you’re already feeling like a pufferfish, the last thing you want to do is eat a full meal that happens to include the spice. Instead, enjoy a cup of homemade ginger tea—made by steeping a few slices of sliced ginger in a mug of hot water for five to 10 minutes—and sip it slowly. (Or try brands like Yogi Ginger Tea and Traditional Medicinals Organic Ginger Aid.)

As for ginger ale? Most brands have little or no real ginger and may contain high fructose corn syrup—which could make the bloat worse. Before you go the soda route, check the ingredients, suggests Gans.

When you feel a cold coming on, you might turn to OJ. But fresh ginger juice (or a ginger smoothie) may make a better choice, thanks to the gingerol—an active compound—in ginger that may help you fight off viruses. In fact, one laboratory study published in the Journal of Ethnopharmacology found that fresh ginger may be effective against human respiratory syncytial virus (HRSV), a common cause of respiratory infections.

Worth mentioning, the researchers found dried ginger was less effective than fresh ginger. So before you blindly purchase the root, make sure you’re choosing a hunk with smooth, unblemished skin. The more bark-like the root looks, the less fresh it likely is.

It may minimize menstrual cramps

Plagued by period cramps? An Iranian study published in the Journal of Alternative and Complementary Medicine found that ginger was as effective as ibuprofen for relieving painful periods.

The study participants took a 250-milligram ginger powder capsule four times a day for three days as soon as they started their periods. You could also try steeping 2 tablespoons of fresh ginger root in hot water, straining, and enjoying with honey or lemon.

Gingerol is an antioxidant in ginger that may help reduce inflammation, says Gans. Research suggests ginger extract supplements and topical ginger ointment may lessen stiffness and pain in people with osteoarthritis (but work with your health care provider to devise a comprehensive treatment plan for any inflammatory condition).

Runners and gym-fiends, this one’s for you: A small study out of the University of Georgia found that daily ginger supplementation also reduced exercise-induced muscle pain.

BTW, you don’t have to ingest ginger to reap it’s muscle-soothing benefits. In a previous interview, Leah Sherman, a naturopathic physician in Portland, Oregon, told Health that ginger’s warming essential oil improves circulation and blood flow, making it an ace at relieving tired muscles. Just grate 4 tablespoons fresh ginger, seal it in a cotton bag, place the bag under running bath water, and soak your soreness away.

Ginger may protect against colon cancer

One small study published in 2011 in Cancer Prevention Research suggested that ginger supplements may help prevent colorectal cancer, specifically in those with an increased risk, thanks to its anti-inflammatory effects on the gut. More research is needed to truly understand this link, and it’s worth noting that study participants took a large dose of the spice (eight 250-milligram capsules a day).

To get our top stories delivered to your inbox, sign up for the Healthy Living newsletter

And it can aid weight loss

Herbs and spices in general are beneficial for dropping weight because the added flavors can help you feel more satisfied with lower-calorie foods. Ginger’s no different: One small study published in the journal Metabolism found that men who drank a hot ginger beverage (made from ginger powder and hot water) after eating felt full for longer. “The results, showing enhanced thermogenesis and reduced feelings of hunger with ginger consumption, suggest a potential role of ginger in weight management,” the researchers wrote.

For a slimming breakfast with a killer kick, try sprinkling ginger powder onto Greek yogurt with berries.