Why You Should Eat Sea Vegetables 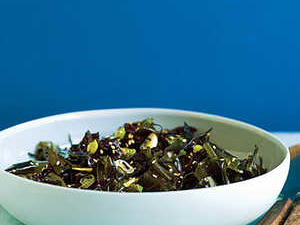 Yep, that means seaweed. It might not be a plant you’ve considered to be a staple of cuisine so much as an impediment to your beach vacation. But seaweed is a common ingredient in many cuisines, and it’s a surprisingly versatile one. Sushi fans are probably already familiar with Nori, the dried seaweed that acts as wrap for many sushi rolls. Japanese cuisine commonly uses seaweed to coax out savory notes in broth and other preparations, as in this Udon Soup with Shrimp. It’s also something that Chef Morgan Jarrett, a specialist in plant-based cuisine, uses often in her work as chef de cuisine at the Brooklyyn Botanic Garden’s Yellow Magnolia Café.

At Yellow Magnolia, which has an array of plant-based dishes, Jarrett uses various kinds of seaweed to replicate the savory note that might otherwise be provided by meat or animal products. One salad on the menu features a “Caesar” dressing that’s completely vegan—Jarrett swaps out the traditional anchovy and egg yolks for a mixture of aquafaba and the dried seaweed dulse. If you were tasting it blind, you wouldn’t know the difference between that vinaigrette and a traditional Caesar.

“People don’t necessarily go to sea vegetables as their first choice,” Jarrett said. But they’re extremely useful, as well as being delicious. Nori and dulse are two varieties that are typically eaten dried. But you can use other forms of seaweed by reconstituting them in warm water. And once you do that, you can treat them as you might any other vegetable. Include them in a stir fry, or in a quiche. You can make a seaweed salad, and even include sea vegetables in dessert, as in this Dark Chocolate-Seaweed Ice Cream.

Like other vegetables, seaweed has a variety of minerals and vitamins, depending on the plant. Look out for varieties like Kelp, Kombu, Sea Palm, Arame, and Wakame. They vary in flavor from milky and sweet, like Arame, to very savory and slightly briney, like Kombu. Try Nori or Dulse crumbled and sprinkled on a simple vegetable saute or stir-fry, or you can even add a touch to dessert to give it the sweet-savory note of a salted caramel.