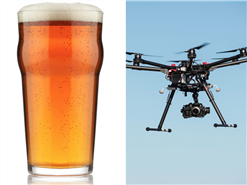 As we’re now about two months after some parts of the country started locking down, there’s a pretty good chance you’ve been pining for the days when you could visit your favorite local bar. Heck, at this point, you’re probably willing to settle for even one of the worst fake Irish pubs on this side of the Atlantic if it meant drinking a draught beer again.

While it’s probably a little while longer before you can sidle up to a barstool and enjoy a proper pour of Guinness, one 152-year-old pub 30 miles north of Dublin has hit on a decidedly newfangled way to get beer to thirsty customers: drone flights.

According to the Guardian, McKeever’s Bar & Lounge has launched unmanned flights for its area customers stuck at home. Piloted by Paul Clarke, the nephew-in-law of current owner Avril McKeever, the drone’s delivered beers (usually Heineken or a few cans of Bulmers, as McKeever says) and crisps around the area.

Of course, this new delivery system has unique disadvantages that the average bartender probably isn’t accustomed to handling “We had a bottle of wine and a bag of Tayto crisps ready to go last night but it didn’t take off because of the wind,” McKeever told the Guardian.

Though it might seem like a bit of cheeky fun, the drone flights are a sign of just how desperate bars around the world are to keep business flowing. For Irish pubs like McKeever’s, the timing of the lockdown, which fell during St. Patrick’s Day and the popular Six Nations rugby Championship, has been especially unfortunate.

At the same time, these desperate times have inspired creativity at more Irish pubs than just McKeever’s. Dublin outpost Graingers Hanlons Corner has taken to pulling pints, sealing them, and having gloved and masked drivers deliver them to customers up to five kilometers away. Fellow Dublin watering hole Big Romance is also doing deliveries, serving up two-pint growlers to customers on demand.

Based on current government policy, it’s unlikely that Irish pubs will open their doors again before August 10. While many quarantined Americans could learn a great deal from that national display of patience, a literal flight of beer would work wonders in the meantime.