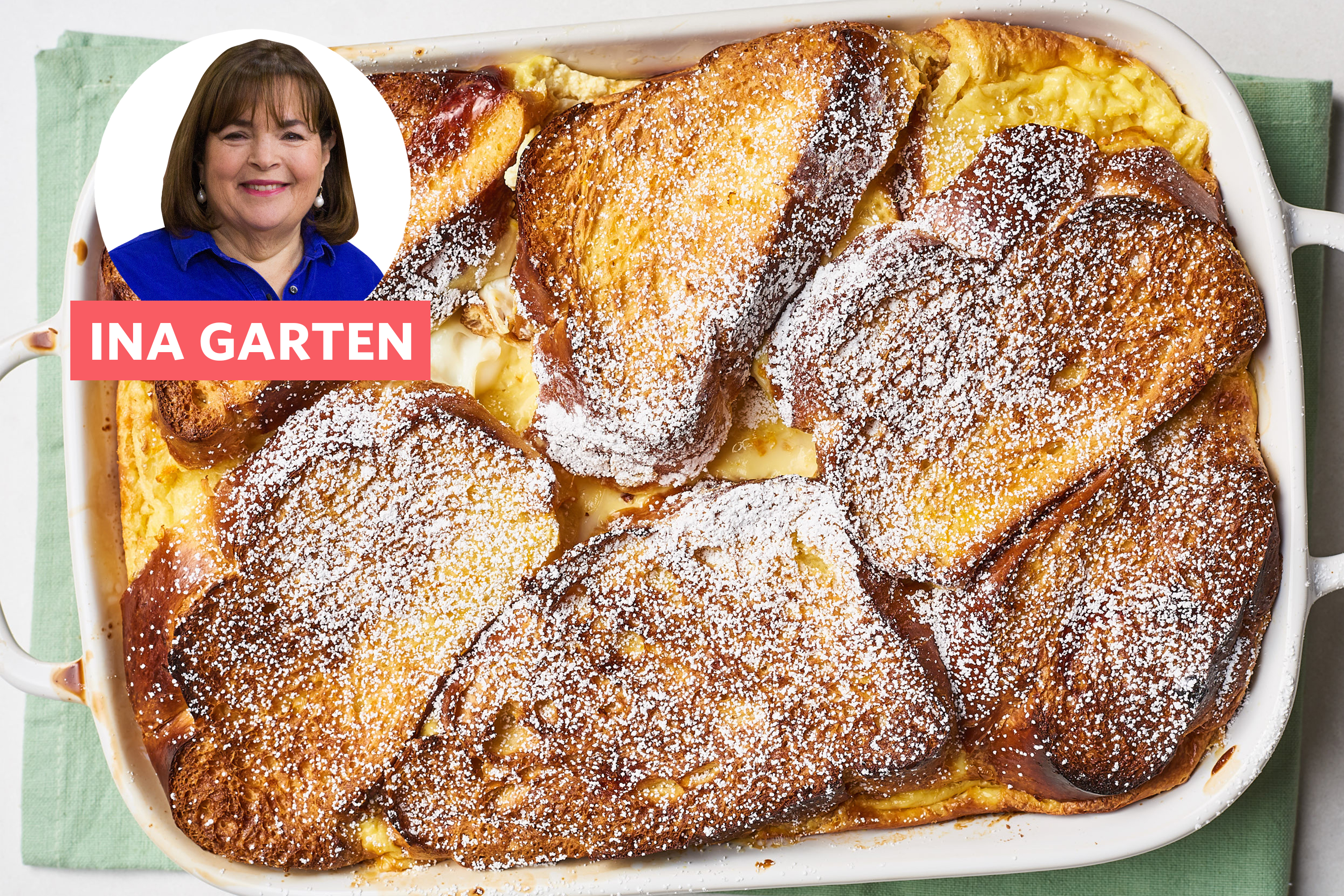 If you’ve been following our celebrity recipe battles here at Kitchn — everything from roast chicken to pie crust — you might have noticed a trend. Whenever Ina Garten is in the running, she’ll often take the top spot. But despite what some might say, there’s no bias here at Kitchn, and the battles aren’t rigged. It’s just that (more often than not!) Ina knows her way around the classics.

And when it comes to breakfast standbys, French toast is definitely up there. That’s why it felt right to make Ina’s version — a hybrid French toast + bread pudding number — one of the contenders here again. But was her breakfast upgrade just as delicious as it sounded on paper? Here’s what I found out when I made it for the first time. 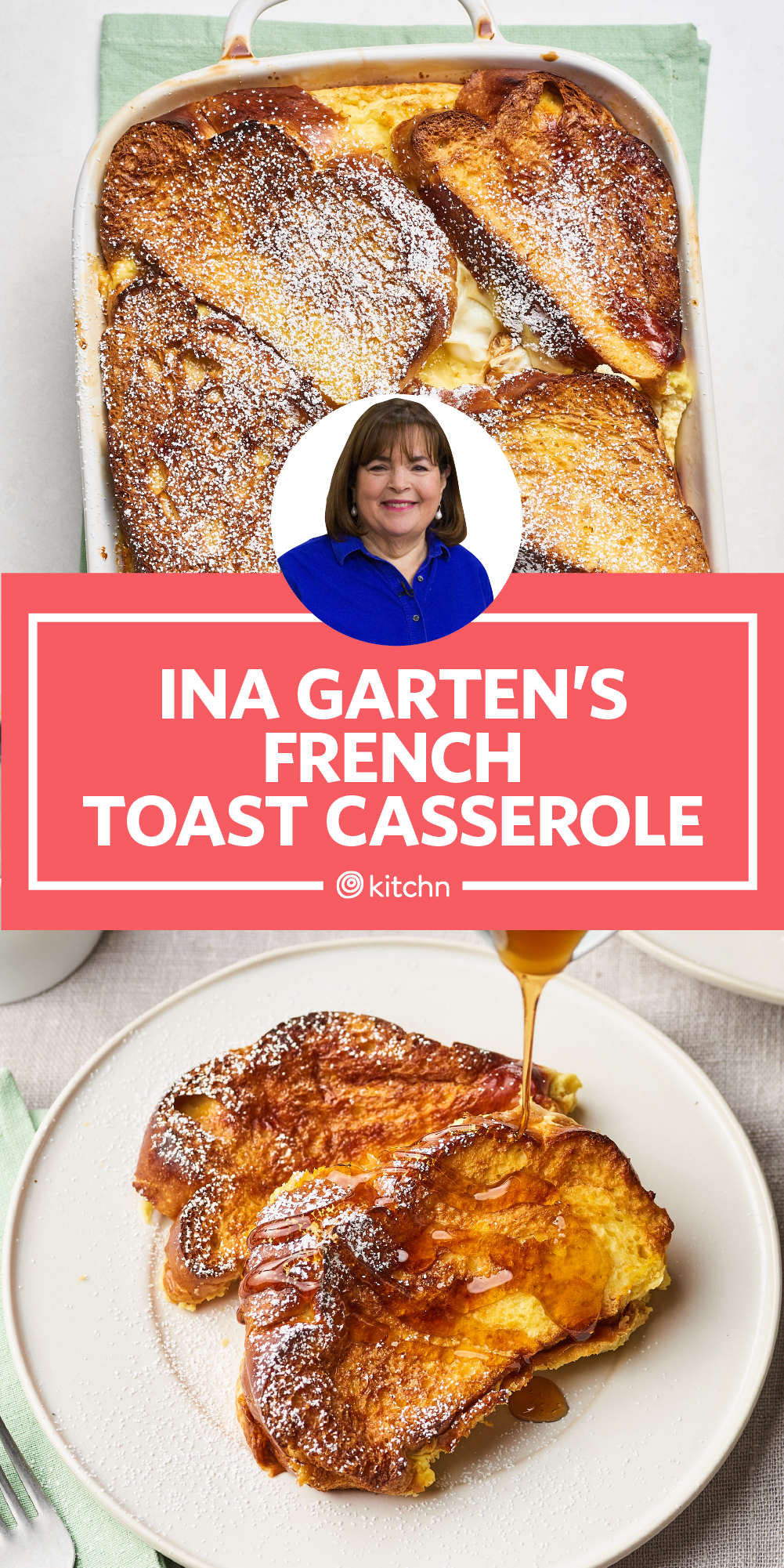 You’ll start with thick slices of challah and layer them into a 9×13-inch baking dish. (Ina says to cut the bread to fit the dish, but I had an abundance of space in between the slices.) Then you’ll whisk 8 eggs, half-and-half or milk (I used half-and-half), honey, orange zest, vanilla, and salt together. Set aside for 10 minutes to soak.

Then it’s time to make a water bath. You’ll nest the baking dish inside a large roasting pan with a bit of water in it. Cover with foil, making sure it doesn’t touch the casserole, and cut a few vent holes in the foil. Bake in a 350°F oven for 45 minutes, then uncover and continue to bake for 40 to 45 minutes until the custard is set and puffed. Remove from the oven and cool slightly. (Ina doesn’t indicate whether or not to cool the casserole in the water bath, but I removed it and cooled on a wire rack.) Cut in to squares and serve dusted with powdered sugar and drizzled with maple syrup.

What I Thought of Ina Garten’s French Toast Bread Pudding

While I love the rich, eggy flavor of challah for other applications, a French toast bake is not one of them. With its close texture and tender crumb, a standard 1-pound loaf didn’t fill the 9×13-inch baking dish. Slices certainly say “French Toast,” but leave too much room for pooling custard. It’s an awkward mix, and I expected more from Ina.

Other issues? For one, it calls for too much dairy in the custard — more than a single loaf of bread can absorb. Ina also overcompensates by calling for a water bath so that the excess custard cooks properly. I don’t know about you, but there’s no way I’m balancing a roasting pan full of boiling water before my first cup of coffee. Not to mention, how do you even get the baking dish out of a roasting pan to cool without boiling your fingertips along the way? The simple solution here is to reduce the amount of custard to just the right amount to be absorbed into the bread.

If there was one upside, it’s that the flavor of the custard was great. Ina infuses the custard with honey, orange zest, and vanilla. It’s light, floral, and will make you feel sophisticated even if you’re making this French toast casserole before you’ve been properly caffeinated for the day. 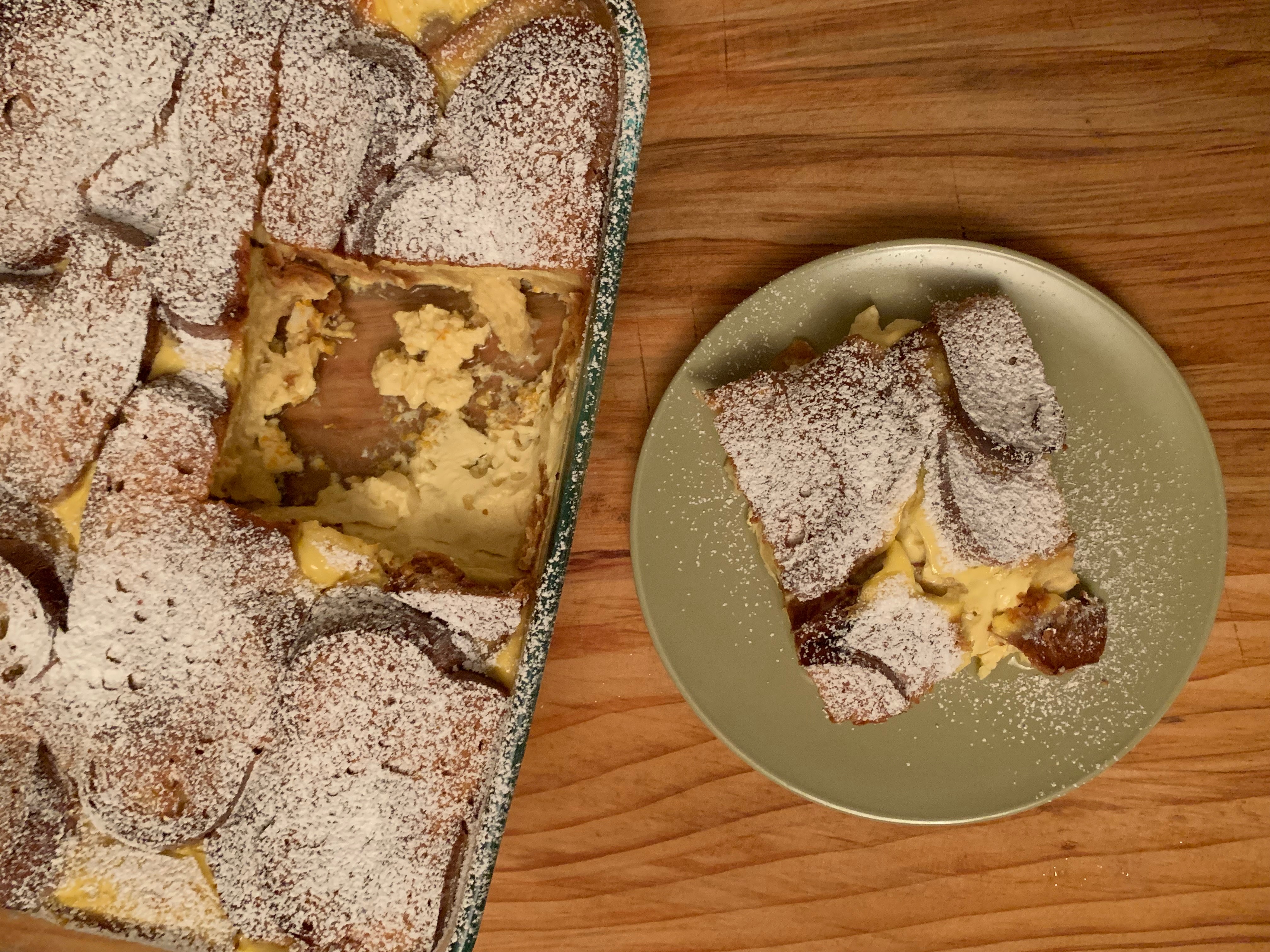 1. Challah isn’t the best bread choice. Pick up a large, chewy loaf of sourdough bread to fill your baking dish. Italian or French bread (not a baguette!) are good alternatives if your bakery is out of sourdough.

2. Axe the extra-large eggs. Ina often calls for extra-large eggs, but there’s no need to make a special trip to the store to pick up the oversized eggs; 8 large eggs are just right for a French toast casserole of this size.

2. Reduce the amount dairy. A good rule of thumb for French toast casseroles is 3 cups of dairy to 8 eggs, so reduce the dairy from 5 cups for a more balanced bread-to-custard ratio.

3. Skip the water bath. With the dairy-to-egg ratio under control, there’s no need to be so careful with the custard. Skip the fussy water bath and move on with your morning.

While the breakfast bake gets points for the orange- and honey-flavored custard, that’s where the wins stop. This French toast casserole is more bread in custard than bread-soaked-custard.