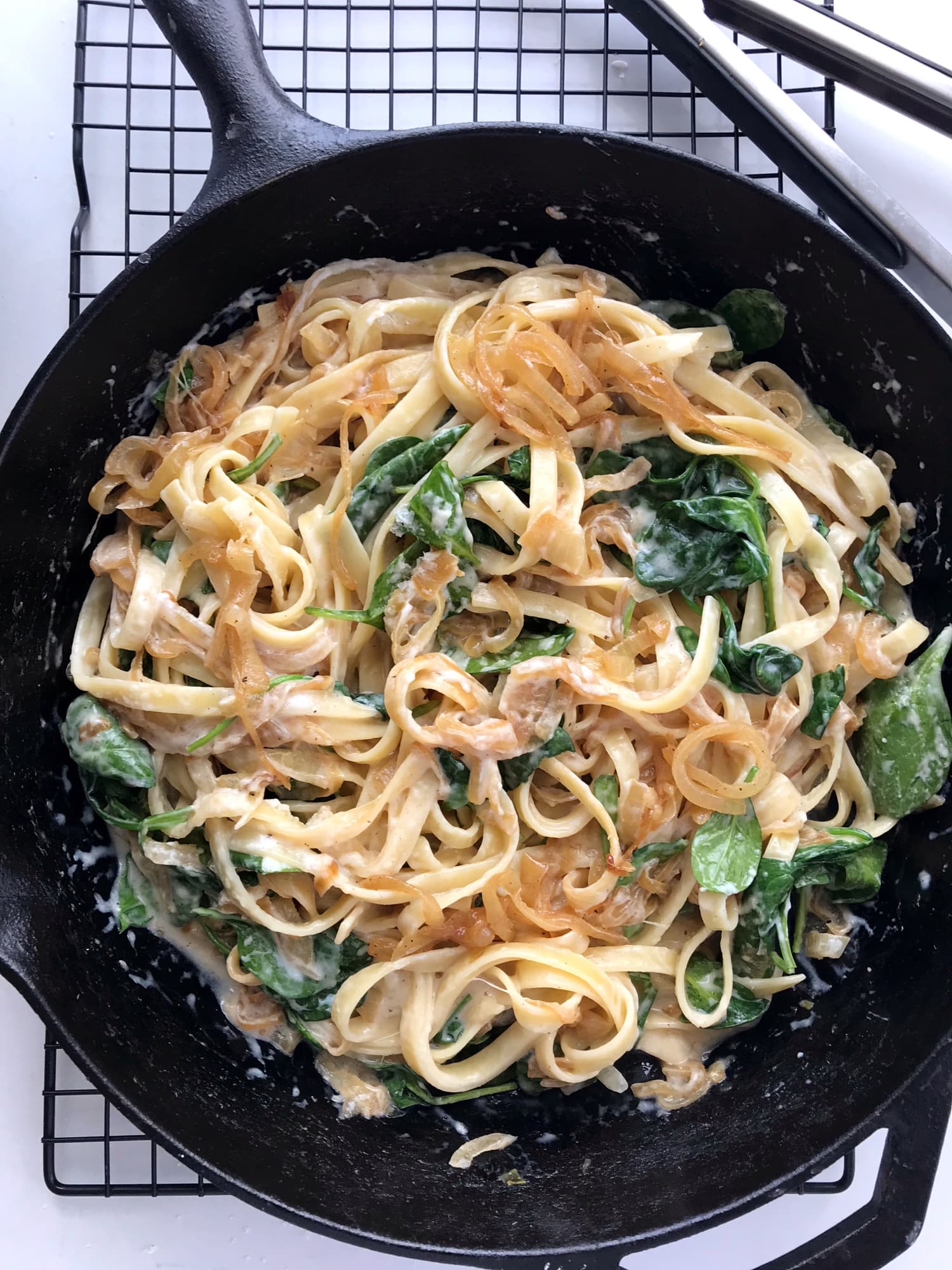 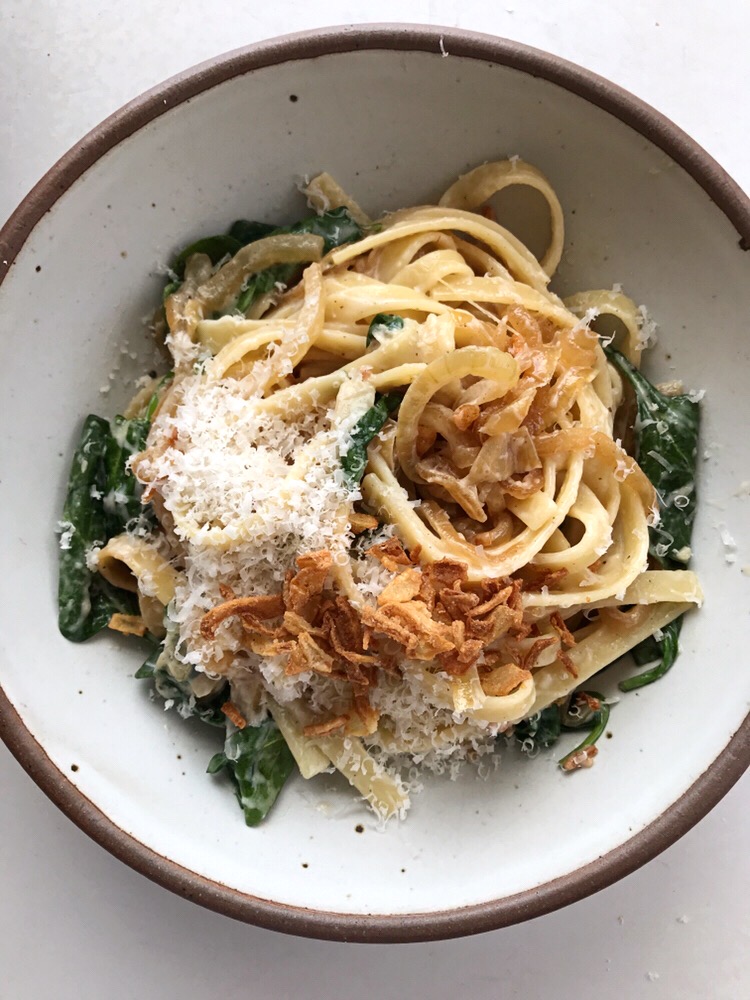 At Kitchn, our editors develop and debut brand-new recipes on the site every single week. But at home, we also have our own tried-and-true dishes that we make over and over again — because quite simply? We love them. And we decided to start sharing some of our absolute favorites with you. Here’s a peek into what we’re cooking and eating in our own kitchens.

Have you ever had a recipe sort of follow you around your life? By now, we’re all very familiar with the idea that everyone should have a “back pocket” pasta, or a recipe that they can pull out in times of stress or bare pantries. (Mine is a simple chickpeas with garlic and tomato paste number.) But there’s also another type of pasta dish recipe that everyone should have: a fast and fancy pasta dinner for guests.

I discovered mine almost 10 years ago when I first starting dating my now husband and learned he loved caramelized onions. Later, we served it together to our friends for dinner parties. It was one of the first pasta dishes I cooked for low-key family date dinners at home with our daughter. Later, we served this dinner to those same friends with their new babies and our kids at the table.

I had nearly forgotten about it until earlier this year and, well, now I can’t stop cooking, eating, or thinking about pasta with sweet onions and garlic. 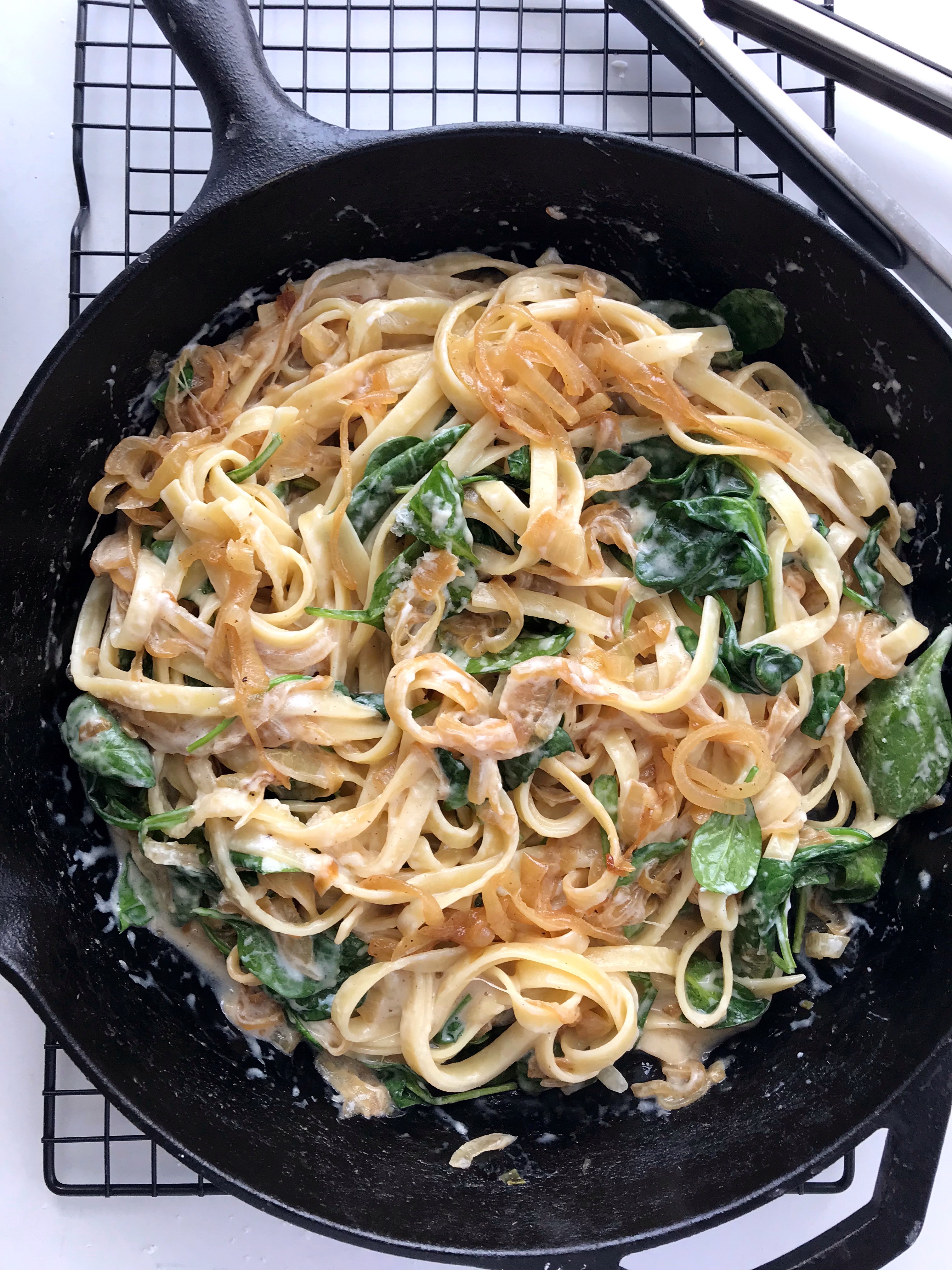 I first read about Pasta with Yogurt, Sweet Onions, and Spinach when Jenny Rosenstrach wrote about it on Dinner: A Love Story in 2010. She wasn’t the first (and obviously not the last) person to write about this gem of a pasta dish that originated in Diane Kochilas’s The Glorious Foods of Greece, but I happen to think her adaptation with sheep’s milk yogurt is the best.

The premise is really simple and, as a result, makes you feel like some kind of food ninja for turning scrappy kitchen staples into something fancy enough for dinner parties. You start by draining some yogurt to thicken it slightly. (The sheep’s milk adds an intense earthy flavor, but full-fat and even Greek yogurt give great results too.) Then you’ll caramelize some onions. Jenny calls for twice as much onion as the original recipe and I happen to agree that this is the correct amount. Cook some pasta — honestly almost any will do, but strands like spaghetti or fettuccini make eating easier.

When the pasta is done cooking, a little pasta water is swirled in the drained yogurt before coating the pasta and adding the onions. I almost always forget the handful or two of baby spinach and find myself swiftly folding it into the serving dish before adding more cheese.

The resulting pasta dish is a bit unexpected, and some of the joy of serving this to dinner guests is watching their surprise, delight, and then curiosity as they try to figure this dish out. The caramelized onions and yogurt make the dish both sweet and tangy, creamy, and still deeply savory. 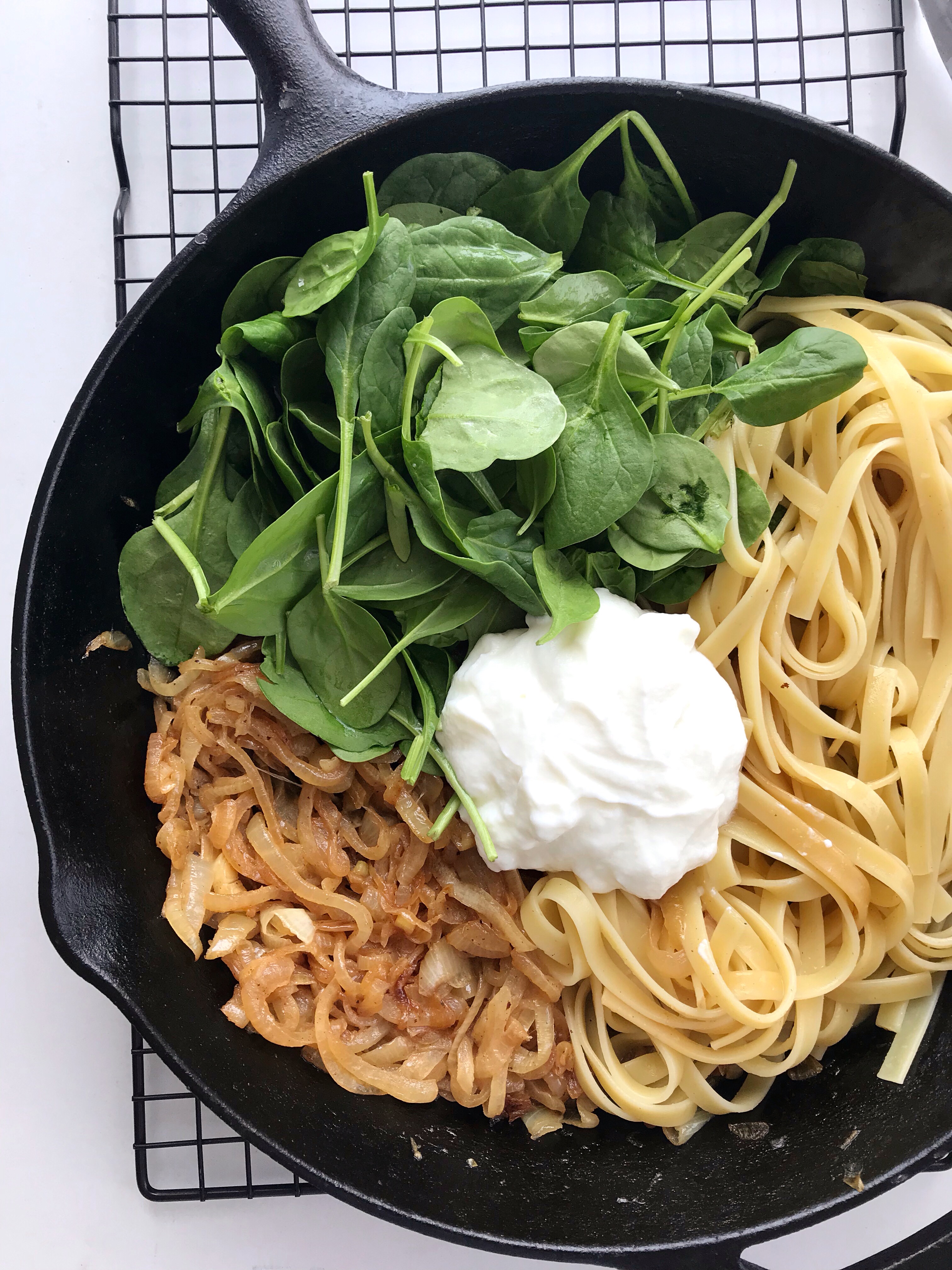 Here’s what is so lovely about cooking any long-strand pasta and dressing it with caramelized onions and yogurt: You almost always have four of the five ingredients on hand, so you can make an impressive impromptu dinner at the drop of a hat.

Don’t be put off by the idea of needing the sheep’s milk yogurt, either. While it is absolutely worth seeking out at least once in your lifetime with this recipe, it’s also lovely with whatever plain yogurt you have at home. A special full-fat ricotta can also be used — and probably ranks #1 in my 7-year-old’s favorite renditions of this pasta.

In the years since I’ve fallen in love with this recipe, I’ve taken to adding some crispy onions over the top just before serving and opting for pecorino Romano instead of the Parmesan. You can’t go wrong.

Get the recipe: Pasta with Yogurt, Spinach, and Sweet Onions