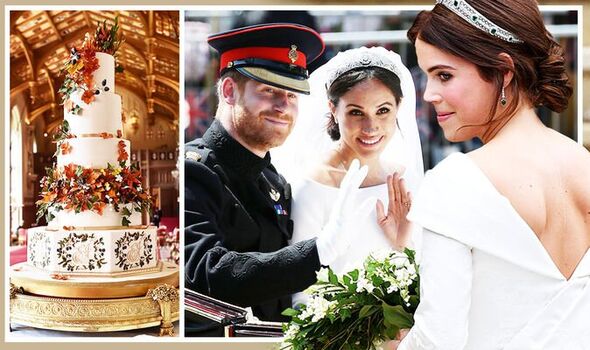 Cake experts at Jackandbeyond.com analysed some of the most extravagant wedding cakes of all time in order to estimate their prices. All figures were provided by an independent bakery based on the size, complexity and decorations of the cakes.

Sophia Zimmer, a spokesperson for jackandbeyond, revealed the most expensive royal cake was Grace Kelly and Prince Rainier III which had a price tag of £10,000.

American actress Grace Kelly married Rainier III, Prince of Monaco in 1956 at the Prince’s Palace of Monaco and the Saint Nicholas Cathedral.

The wedding was watched by over 30 million viewers and after described as the “wedding of the century”.

Grace Kelly wore a stunning wedding dress designed by Helen Rose of MGM which is considered one of the most elegant gowns of all time.

The Hollywood actress and the Prince of Monaco chose a six-tier cake which “was also cut with the Prince’s sword, and featured intricate detailing, a working music box, and a cage from which two turtle doves were released,” Sophia Zimmer explained.

She added: “More artwork than cake, Jackandbeyond.com believes it cost the couple around £10,000.”

The second most expensive royal cake, according to the bakery, was at the wedding of Princess Eugenie and Jack Brooksbank, a “colourful leafy autumn-inspired creation”.

Buckingham Palace announced that Jack and Eugenie’s wedding dessert was “a traditional cake, with a modern feel,” and “incorporated the rich colours of autumn in its design”.

Over 400 eggs, 53 packs of unsalted butter, 33 pounds of organic self-rising flour, and 44 pounds of sugar were used to make the royal cake.

The masterpiece also featured sugar ivy, in a nod to Eugenie and Jack’s new home: Ivy Cottage at Kensington Palace.

Sophie Cabot, who made the cake, explained: “I am incredibly excited to be given this wonderful opportunity to create such a special and unique cake. It has been lovely working with Princess Eugenie and Jack and I really hope they enjoy the cake on the day.”

Eugenie and Jack married at Windsor Castle. The ceremony was followed by a short carriage ride, a reception thrown by the Queen and an intimate reception in the evening hosted by the Duke of York at the Royal Lodge.

The beautiful and unique lemon cake which was covered in an array of fresh flowers, mostly peonies and roses, cost approximately £2,900, according to the experts.

The hand-decorated sponge was designed by Claire Ptak and made with elderflower syrup from the Queen’s own tress on her Sandringham estate.

The baker was reportedly assisted by a team of six others when making the three-tier creation.

The cake was served during the reception which was held at Frogmore House after the ceremony at St George’s Chapel, in Windsor Castle.

The Palace tweeted: “A filling made from Amalfi lemon curd and elderflower buttercream ties all the elements together.

“The cake is decorated with Swiss meringue buttercream and 150 fresh flowers, mainly British, and in season, including peonies and roses. #RoyalWedding.”