The Queen has two birthdays – the day she was born, in April, and the official birthday of the British monarch, which usually takes place on the second Saturday of June. It is not yet known how Her Majesty will celebrate the latter on June 12, but it could be by eating a dark chocolate mousse.

Darren McGrady is a former royal chef who cooked for Queen Elizabeth II, Princess Diana, Prince William, and Prince Harry during his time at Buckingham Palace.

He served the royal family for fifteen years and still works at a chef, but in the US.

In September last year, the former royal chef showed viewers how to make one of the Queen’s favourite desserts. 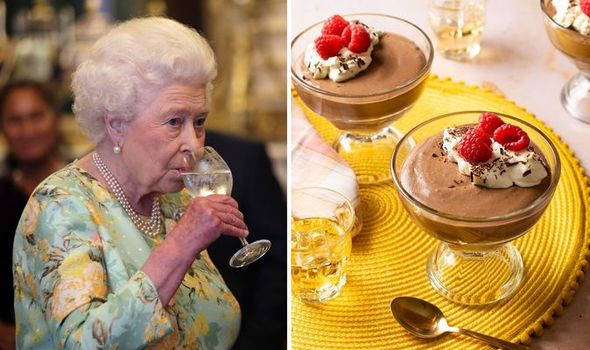 Darren revealed that the Queen “loves chocolate” and one of her favourite desserts is a chocolate mousse.

However, the mousse is not just any type of mousse – it is made with whiskey, specifically Drambuie.

Drambuie is a golden-coloured liqueur made of Scotch whiskey, heather honey, herbs, and spices.

Darren usually served the Queen the chocolate mousse when the family was staying at Balmoral Castle in Scotland.

The former royal chef said: “We never knew whether the Royal Family were going out for dinner, barbecuing in the hills, or having dinner at Balmoral and would need to prepare dishes that could be served anywhere on the estate.

“It’s no secret that the Queen loves chocolate, and the darker chocolate the better.”

Speaking in a video on YouTube, Darren said: “Here’s the most delicious chocolate mousse I made for the Queen – both at Balmoral and banquets at Buckingham Palace – that you will ever taste.”

He went on to explain that he chose Drambuie as the whiskey because of its combination of flavours. 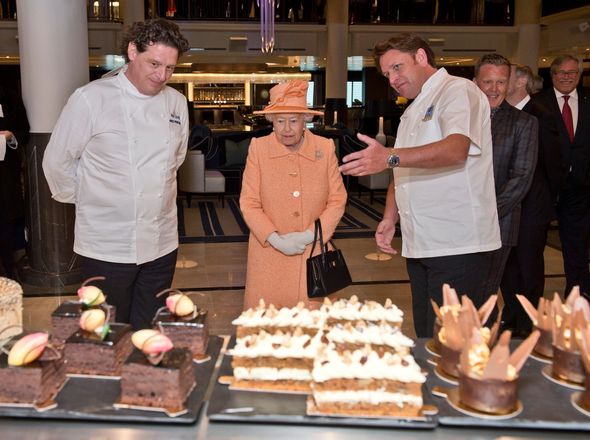 The chef said: “I’m using Drambuie because I love the flavours in there – the gorgeous herbs and spices, and sort of honey in there as well.

“All this combination comes together to make an incredible chocolate mousse.”

Darren added that all the royal chefs “loved” cooking at Balmoral Castle because of the “gorgeous produce” on the estate.

He said: “The grouse, the deer, the salmon, its own self-contained vegetable garden with just beautiful produce.

“All the vegetables and fruits and berries.

“They were simply amazing. I think Scotland has some of the best berries in the world.”

The Queen’s favourite chocolate mousse is easy to make and only consists of seven ingredients, including Drambuie.

Drambuie can be found in all major supermarkets and its new bottle, which is 50cl in size and costs £15, has just been launched in stores last month.

Melt the chocolate, taking care not to overheat it in a large bowl.

Put the coffee in a small bowl and dissolve in the boiling water.

Whisk the egg yolks into the chocolate and then add the dissolved coffee and the whiskey and mix well.

Whip the cream until stiff and peaks hold.

Whip the egg whites until stiff and the peaks hold.

Fold the cream with a metal spoon into the chocolate mixture followed by the whipped egg whites.

Keep folding until there are no white specks of cream or egg white and then pour into a decorative serving dish.

Put the mousse into the refrigerator for at least three hours to allow the chocolate to set.

The top can now be decorated with rosettes of whipped cream and chocolate curls for table presentation.

This mixture makes enough for about eight portions of dessert.