PBR’s New Peach Hard Tea Is Summer in a Can 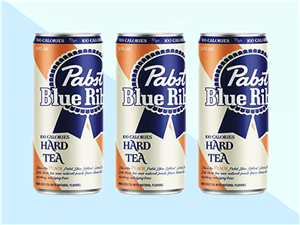 Right now, most of us have no idea what summer will look like or where we’ll be enjoying it. For all we know, it could just be one, long air-conditioned nightmare. But just because you can’t go outside doesn’t mean you can’t crack open a few summery beverages to chase the existential dread away.

If you’re looking to spend the longest days of the year putting heretofore unknown types of alcohol into your body, you might want to know about Pabst Blue Ribbon’s recently unveiled “Hard Tea Peach,” which seems to be pretty much exactly what it sounds like. Think of it as a peach-flavored Twisted Tea with a mustache and a denim jacket if that helps you out.

Though details so far are scant, the beverage’s label describes it as a “bold black tea and natural peach flavor blend[ed] into a refreshing and satisfying brew.” In terms of other details, it weighs in at a relatively light four percent alcohol by volume and just 100 calories, which makes it somewhat similar to (though perhaps less aggressive than) the spiked seltzers of the world that have become synonymous with warm weather drinking.

It’s not the first time PBR, a brand synonymous with dive bars and hipster degenerates, has added an unexpected flavor in an effort to broaden its appeal. They’ve put out a hard coffee before, but this seems more spiritually aligned with the “Stronger Seltzer” they teased last summer.

I don’t know if peach beers are what the world needs right now. Probably pretty low on the priority list in the grand scheme of things. But alcohol is probably more essential than it’s ever been. So if you’re out of ideas for things to drink over Zoom meetings, give this Peach Hard Tea a try once it becomes more widely available soon. If it helps, you can pretend you’re drinking it ironically.

Our Best Plant-Based Recipes
We and our partners use cookies on this site to improve our service, perform analytics, personalize advertising, measure advertising performance, and remember website preferences.Ok