Mega Stuf Oreo Cereal Is Coming to a Bowl Near You 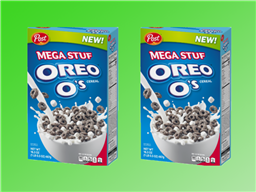 These days, it feels like we’re hopelessly trapped in an Oreo arms race. Not only are there a plethora of polarizing flavors to choose from, but there’s arguably too much ‘stuf’ sandwiched between those two cookies. Now, it would seem that not even our cereal is safe from the Oreo onslaught.

That’s because Mega Stuf Oreo O’s are headed to a bowl near you. Sold exclusively at Walmart, this latest offering takes the crunchy, chocolatey Oreo O template you may already be familiar with, and ‘stufs’ it with additional cream. In fact, these things are so ‘stufed’ that they transcend the confines of the cookie form itself, bursting forth in the shape of a sweet, white marshmallow.

In a way, it’s a response to the prevailing trends in the world of cereal today. We’ve got cereal derived from ice cream and Peeps now, so pretty much anything sweet that you can put in a bowl is fair game at this point. In this case, it’s almost as if Lucky Charms and Oreo O’s had a baby, and this beautiful bowl of decadence was the end result.

The most curious part of this is probably the shape of the ‘stuf.’ We’re so used to thinking of an Oreo’s creme filling as a disk of sugar, but these resemble traditional campfire marshmallows more than anything. A bit disappointing, but perhaps inevitable when you think about the logistics of fitting a mega amount of ‘stuf’ inside a cereal box. Compromises had to be made somewhere.

So, if you want to eat Oreos for breakfast but have somehow felt that standard Oreo O’s just weren’t doing enough for you, head to Walmart to grab a box. It’s not clear if this is a limited time offering or not, but it’s probably in your best interest to hoard as much of this stuff as possible either way.