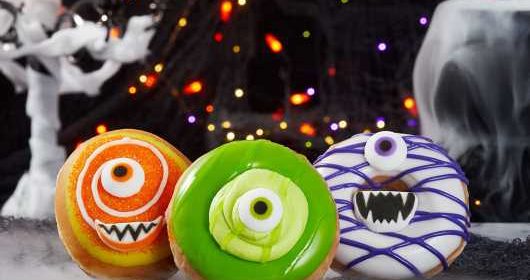 Although Halloween is still a few weeks away, spooky season is already in full swing, and plenty of restaurants and bars are getting in the spirit. Replay Lincoln Park, the Chicago bar that’s known for themed pop-ups like Parks and Recreation and Game of Thrones, recently announced that it would be transforming into an It experience this month (watch out for Pennywise); Taco Bell also decided to launch a collection of Halloween costumes this year, in case you feel like dressing up as Diablo sauce or a Cheesy Gordita Crunch. The latest? Krispy Kreme, who announced a new line-up of “Monster Batch Doughnuts” (a play on the "Monster Mash," perhaps?) for customers to enjoy this month. The collection includes “Slimon, the Slime Monster Doughnut,” “Hypno-Henry, the Cake Batter Monster,” and “Mumford, the Mummy Monster Doughnut.”

We had the opportunity to try all three doughnuts when they launched. First up was “Mumford,” which is an Original Glazed doughnut topped with white icing and purple icing ribbons, meant to mimic mummy wrapping—a sugary eyeball and mouth with fangs complete the look. If you’re craving a simple doughnut, this is definitely your best option out of the three, since it doesn’t have any filling. "Hypno-Henry," on the other hand, is filled with creamy cake batter and topped with a mix of yellow icing, sparkling orange sugar, and a swirl of white icing for a hypnotic effect. It’s the sweetest out of all three options, with a taste reminiscent of Funfetti cake that’s compounded by the crunchy sugar topping.

Last up, we tried a piece of the "Slimon doughnut," which is an Original Glazed doughnut filled with lemon slime—yes, slime, not unlike the gelatinous green goo you know and love from Ghostbusters—and dipped in green icing with a “green Kreme dollop,” a sugary eyeball, and more slime ribbons. Although we expected said slime to be incredibly sweet, it wasn’t as strong as anticipated, with a bright lemon-forward flavor that’s similar to Girl Scout Lemonades cookies. Slimon, alongside the other two doughnuts, became available on October 7 and will stick around through Halloween. As an added bonus, if you show up to a Krispy Kreme store in costume on Halloween, you’ll score a free doughnut of your choice.

Krispy Kreme isn’t the only brand debuting spooky doughnuts for the holiday, either. On October 1, Dunkin’ announced the return of its “Spider Donut,” comprised of a doughnut frosted with orange icing and topped with an “eight-legged donut creature” made from a glazed chocolate Munchkin, with chocolate drizzles for legs and white or orange icing for the eyes. You can also expect Dunkin’s classic doughnuts to get a festive makeover, too with “seasonal sprinkles” and orange icing drizzles to match. Plus, customers can get any 10 Munchkins for $2 all month long—grab a few boxes for your Halloween party.