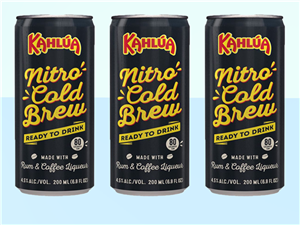 Over the past few years, nitro cold brew, which takes your regular coffee and kind of jazzes it (and you) up, has been a major trend. Simultaneously, there’s been a rise in products that combine coffee with alcohol.

So what do you get when you put those two things together? Kahlúa’s boozy new Nitro Cold Brew. Weighing in at a reasonable 4.5 percent alcohol by volume, each 6.8 fluid ounce can is made with rum, coffee liqueur, and Arabica cold brew patiently steeped to perfection.

While you’d think nitro cold brew is the kind of thing you could only experience on tap at a coffee shop, the elements would seem to work in a can as well. Think of it like the coffee version of a Guinness: the incorporation of nitrogen (hence “nitro”) gives the coffee a nice, foamy head to it, equivalent to what you’d find if you poured a pint of the fine Irish stout.

WATCH: Trader Joe’s Made a Cookie Butter Beer And It's Coming to Stores Soon

Given that Kahlúa in its base form is already a coffee liqueur, you might not be shocked to discover that this isn’t the first time they’ve thought to combine coffee and booze in a can. In 2019, they released a canned espresso martini. That boozy beverage included a “smart nitro widget” to help coax bubbliness out of the can, and you’d have to think that served as a bit of inspiration this time around as well.

So if you were in the market for a classier, more grown-up version of OG Four Loko, Kahlua’s take on Nitro Cold Brew offers both the booze and the boost you’re looking for. Just don’t get carried away drinking all four of the cans you can buy for $9.99 or you’re in for a very strange day.