James Martin reveals how to make a simple fish pie

This week on James Martin’s Saturday Morning, a viewer called in to the studio to ask James how to make a fish pie. Teresa explained to James that she had bought a fish pie mix from the supermarket but had no idea what else she would need to make the pie.

James, as usual, had an answer at the ready.

The chef showed Teresa how to make a white sauce for the pie, before adding peas, and topping the pie off with mashed potato.

James explained that the fish pie mix, which includes haddock, cod, prawns, or a mixture of all three, can be bought in any supermarket and is the first thing to be put in a deep oven tray.

Next, the chef said that the sauce is the most important thing. 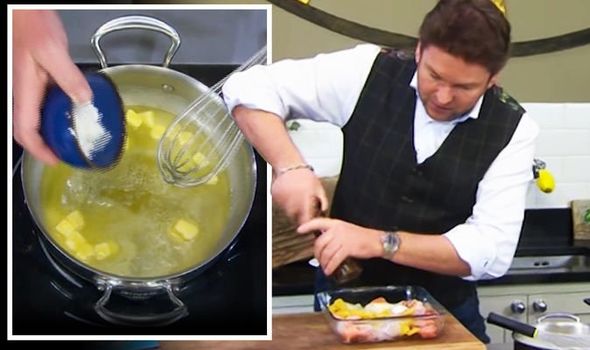 To make the white sauce, James started to melt butter in a pan, before adding flour to it.

He whisked the butter and flour and then added a little milk.

The chef told viewers to keep whisking the mixture and adding more and more milk as you go.

The mixture quickly thickens, but James warned against making the sauce too thick.

DON’T MISS:
How clean is YOUR sink? Huge disgust at TikTok showing plughole crawling with bacteria [CLEANING]
Weight loss: Ditching sugar from diet can help you slim down [INSIGHT]
Keto diet: Why you shouldn’t do the keto diet – according to a doctor [EXPLAINER]

Recommending how much milk to put into the pan, James said: “Do it by the eye.”

He told Teresa that the pan was simmering on a medium to high heat.

“Get the sauce to the texture you think is best,” James said.

The chef then seasoned the sauce, adding salt and pepper to it, and doing the same to the fish. 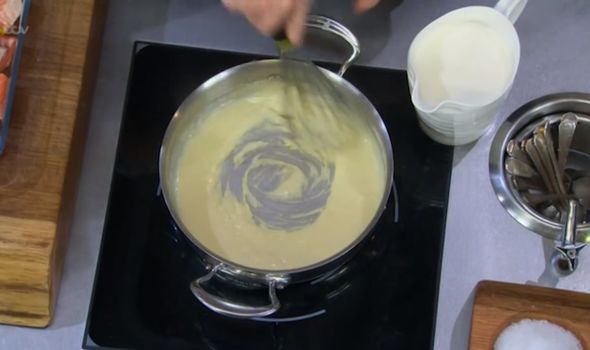 James then put garden peas into the tray, on top of the fish.

“I love summer peas in a fish pie,” James said.

When James was happy with his sauce’s texture, he recommended adding either mustard or lemon juice to it for extra flavour.

The chef opted for lemon and squeezed the fruit so that a little juice dropped into the sauce.

Lastly, the celebrity chef poured the sauce over the top of the peas and fish in the baking tray.

He told viewers that to finish making the pie, they could put either potatoes or puff pastry as its topping.

After layering the potato on to the other ingredients, the fish pie was ready to be popped into the oven.

“It should take about 30 minutes,” James said.