James Martin: How to make your own brandy snaps as a delicious mid-morning snack

On ITV’s James Martin: Saturday Morning today, the celebrity chef took a video call from viewer Karen, who lives in Spain. Karen wanted to know how to make brandy snaps.

They have been called the British version of Italian cannoli.

Brandy snaps are perfect to eat as a mid-morning or mid-afternoon snack with your tea or coffee.

Thanks to their elegance and scrumptious taste, they can also be quickly whipped up for guests too – when you are once again allowed to invite people into your home, of course. 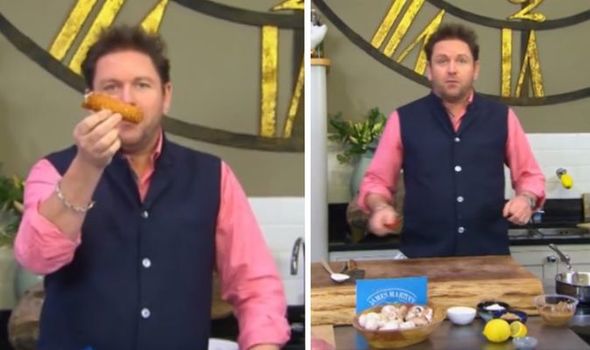 James assured Karen that brandy snaps are not “very difficult” to make, before showing her the ingredients: soft brown sugar, butter, golden syrup, flour, and ginger.

Cinnamon and a touch of lemon can also be added to the mixture for extra flavour.

“The golden syrup is quite crucial,” James said.

The chef melted butter in a saucepan before adding the syrup, ginger, and cinnamon.

Once the butter started to melt, James squeezed some lemon into the mixture.

He then took the pan off the heat and added the sugar and the flour.

He then mixed everything together, saying: “This will form your paste.”

He poured the paste into a bowl and put the bowl in the fridge.

After it had hardened, the chef used his hands to shape the paste into five balls, before placing them onto a baking tray.

“Five of them will fill a whole tray because they expand,” James explained. 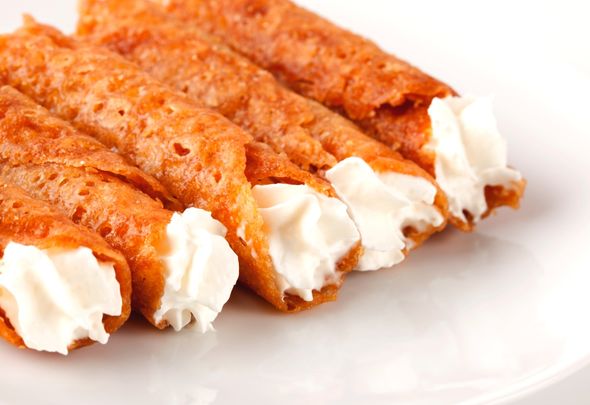 James turned the oven’s heat to 180 degrees and told viewers to cook the ginger snaps until they are brown.

After taking the snaps out of the oven, he then recommended letting them cool for a few minutes before putting them back in “for a minute”.

This was to warm the biscuits again so that they would be easier to handle and mould into shape.

For the next part of the recipe, James said that audiences can use a cardboard kitchen roll holder (or anything else with a similar shape) to wrap the biscuits around.

Taking the biscuits out of the oven for a second time, James wrapped them around the roll.

He used one biscuit as “a basket”, wrapping it around a ceramic holder, but he also recommended using a glass.

The rolled brandy snaps were then ready to be filled with cream.

James squeezed whipped cream into either side of the biscuits and recommended allowing them to cool down before eating them.

“Try not to put them in the fridge,” he added as a last piece of advice.