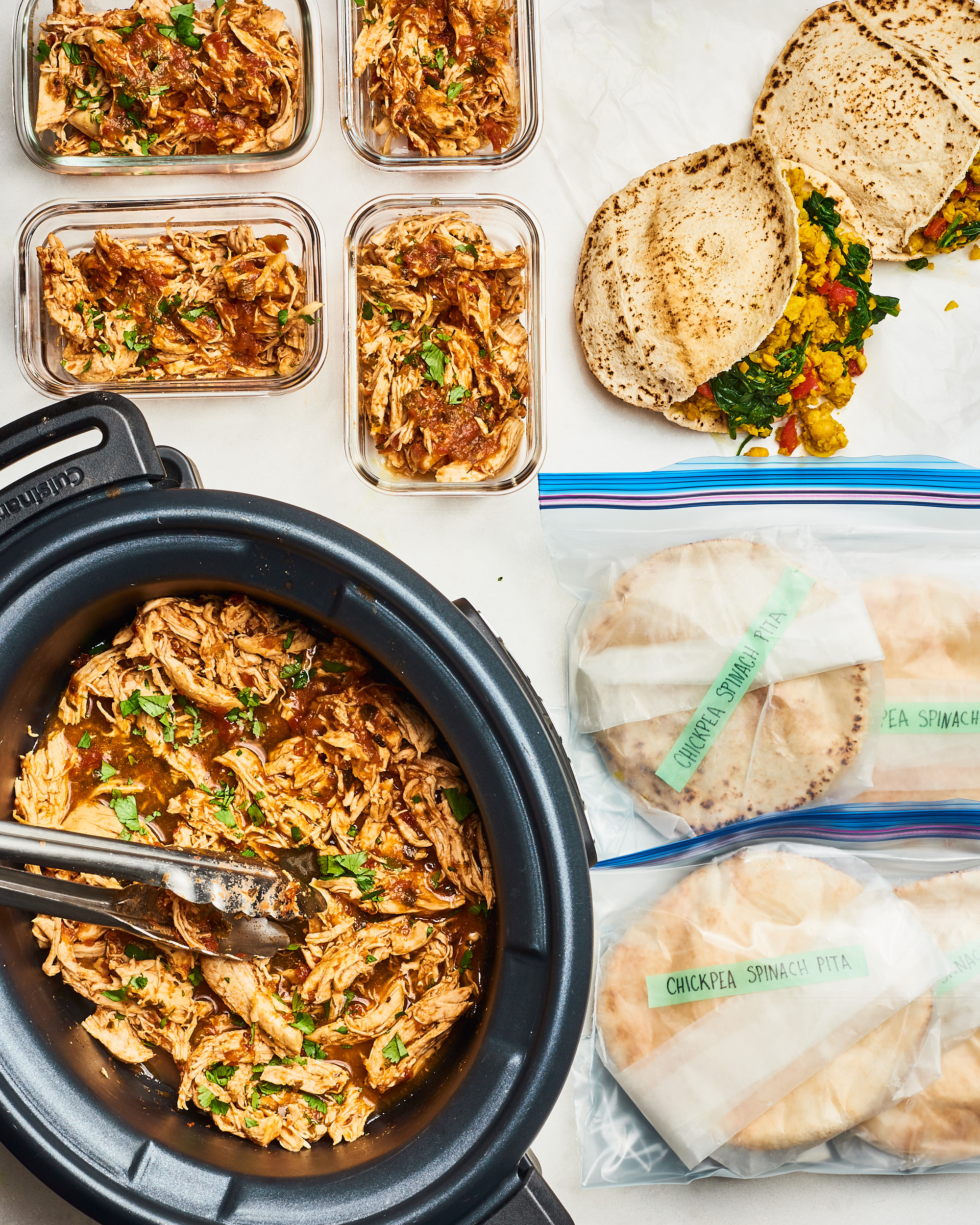 Now that I’ve been meal planning and prepping for a while, I’ve seen first-hand what a difference it makes in the week ahead. I spend less, waste less, eat smarter, and spend a whole lot less time in the kitchen during the week. So when presented with some extra free time last weekend, I decided to double down on my efforts and prep for two full weeks of meals for my family of two — some to be eaten straight away, and some to be stocked in the freezer for the following week. Talk about a gift to my future self!

If there’s one thing I love more than my regular weekly meal prep, it’s batch cooking. I put in some extra time and effort upfront and, in this case, reap the benefits in the form of prepped and ready-made food over the course of two weeks.

My husband and I both value variety in our meal plan, so the second week of this meal plan is not an exact repeat of week one. Instead, I change things up by both repurposing dinner leftovers as lunch and freezing them for the following week. 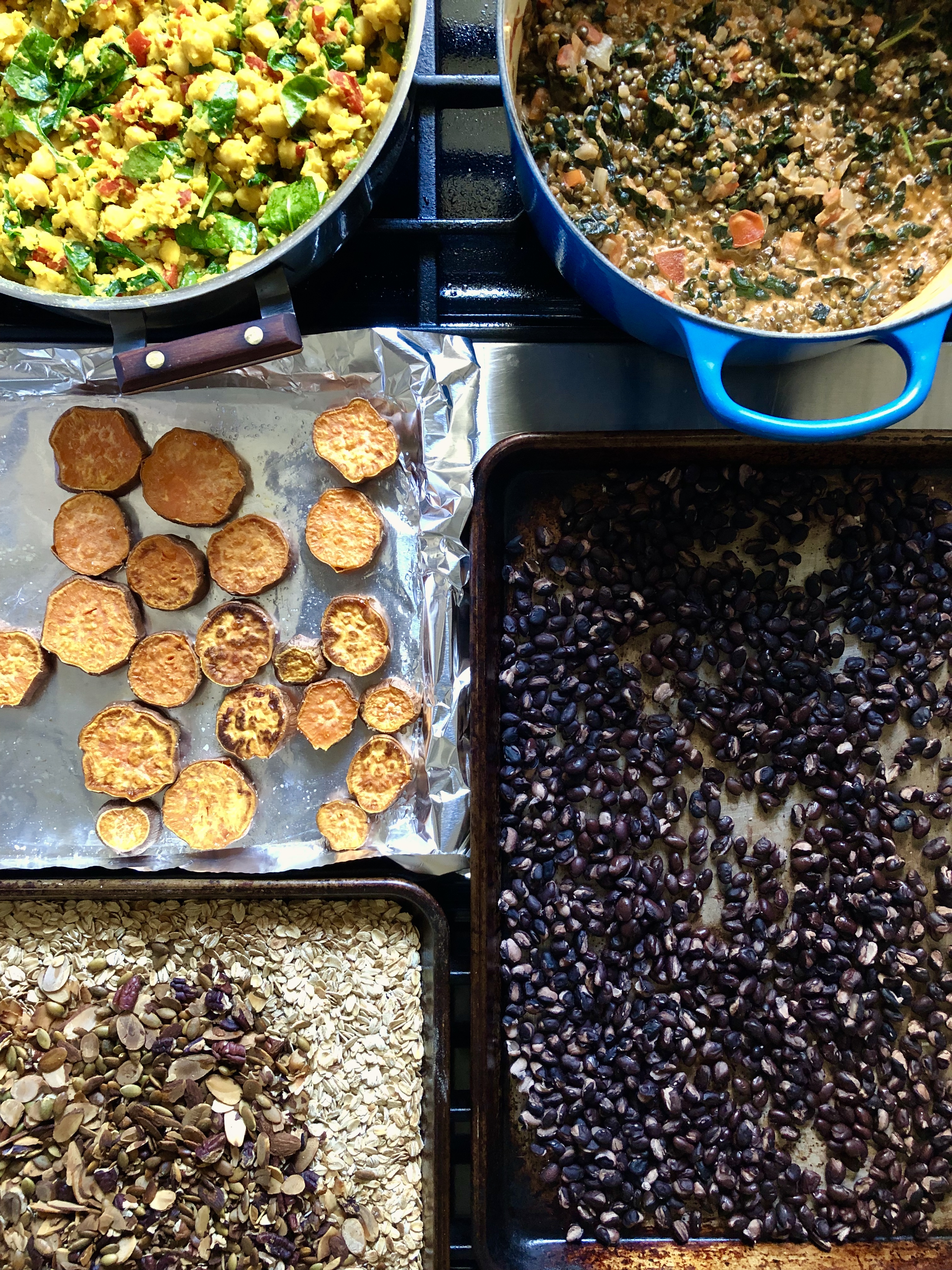 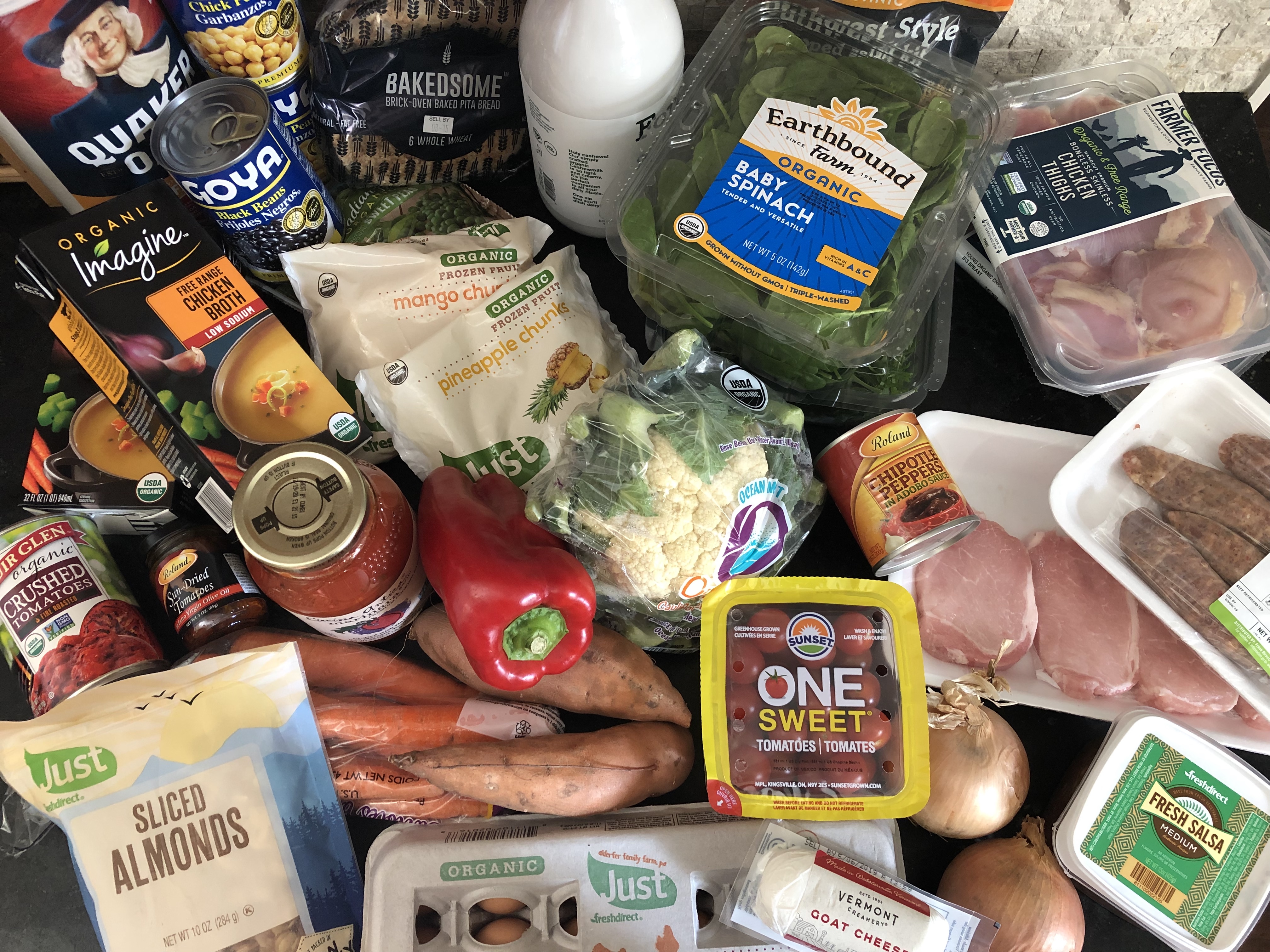 Below are the ingredients I bought or used for this meal prep plan. I also relied on staples already in my pantry, like oil and spices. 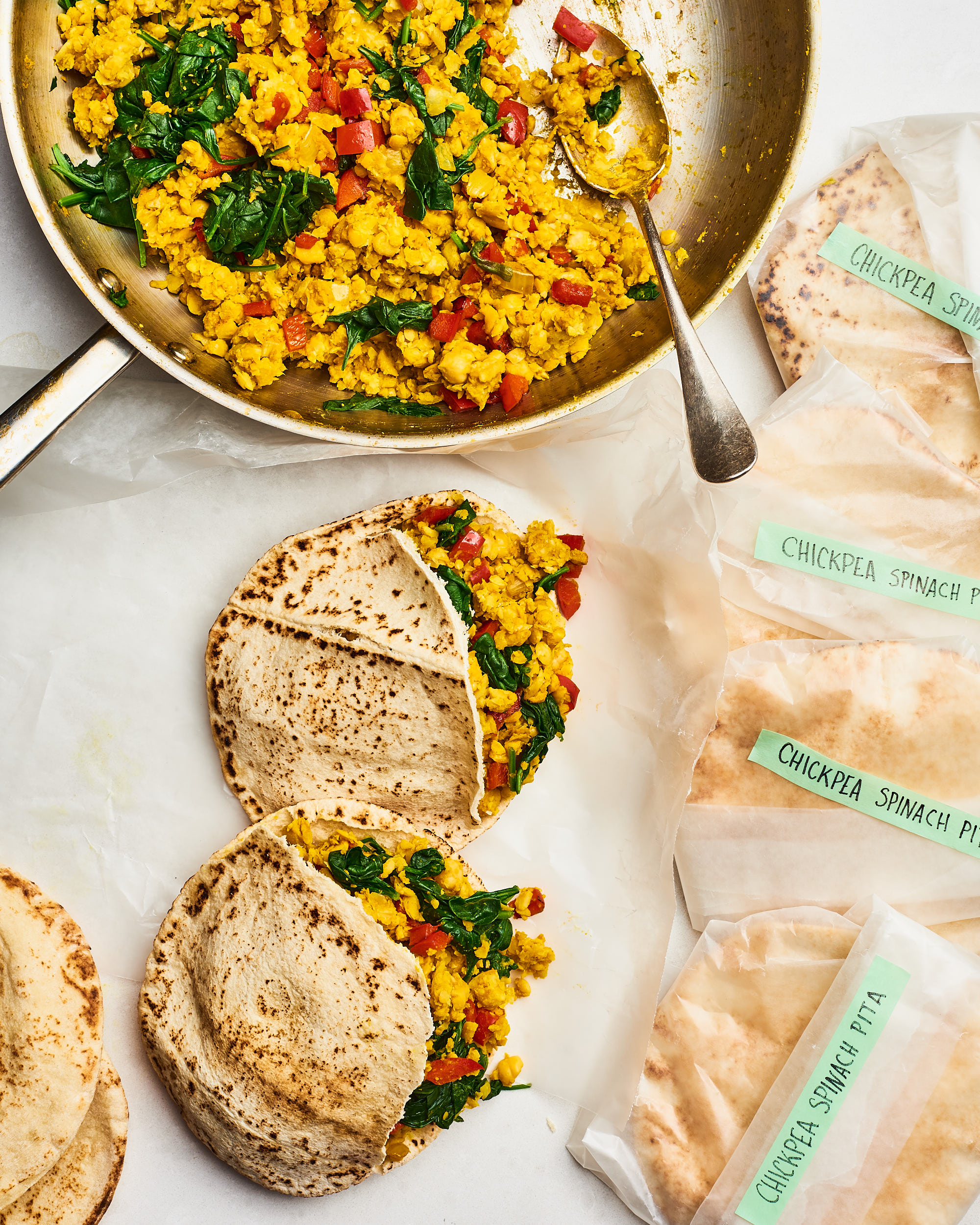 My approach to meal prep is all about efficiency, multitasking, and embracing the “meanwhile.” This means I always start with the tasks that take the most time, and I aim to take advantage of those sporadic hands-off moments (the oven preheating, water coming to a boil, etc.).

My prep list is as follows (and we’ve created a handy pinnable image with the menu and prep list below, if you want to save this for later!):

1. Preheat oven: This is always my first order of business when I step into the kitchen for a meal prep session. By the time I get the slow cooker and lentils going, the oven is heated and ready to cook the muesli, beans, and sweet potatoes.

3. Cook braised lentils: The lentils require some hands-on work in the beginning, then simmer undisturbed for 30 minutes. I skip the broccoli rabe and instead stir in a small bunch of chopped kale leaves about halfway through cooking. While the lentils simmer, I prep the muesli, black beans, and sweet potatoes.

4. Cook muesli: I pop two baking sheets in the oven to toast the oats and nuts for the muesli, which takes about 15 minutes. When it’s done, I combine the nuts and oats on a single baking sheet and set aside to cool.

6. Cook chickpeas and spinach: I use my food processor to mash half of the beans (so much faster than using a fork!), then wipe it clean when I’m done, since I’ll use it again later for the black bean burgers. To streamline and simplify the pita filling, I add the onion, bell pepper, and spices to the skillet at the same time. Once cooked, I let the mixture cool. I’ll stuff the pitas later on in my prep session.

7. Broil bell peppers: Once the beans and sweet potatoes are out of the oven, I set it to broil and quickly broil the bell peppers, which will be used for sausage and peppers.

8. Cook and assemble breakfast wraps: For these wraps I think it’s more efficient and less messy to cook the spinach first, followed by the eggs. I use a dozen eggs (the recipe calls for 10) so that I’m not left with two stragglers and so the recipe can stretch to yield six (rather than four) wraps. I also whisk in about 1/4 cup of cream left over from the lentils. (Extra fat is a friend to eggs anytime you plan to freeze them!). After scrambling the eggs, I heat the tortillas over a stove burner to give them a little char and to make them more pliable for rolling. I want the eggs and tortillas to be completely cool before assembling, so while I wait I shred the salsa chicken directly in the slow cooker, and add the dried fruit to the muesli and transfer it to a jar.

9. Make black bean burger patties: At this point all cooking is complete, and I move on to prep work. I blitz the mixture for the burger patties in the food processor, then shape it into four patties that will get stored in the freezer for a lunch and a dinner during week two.

10. Assemble chickpea and spinach pitas: I stuff the cooled chickpea mixture into the pitas and wrap each one individually. I stash four in the fridge for lunches in the coming week, and put the remaining pitas in the freezer for the following week.

11. Assemble smoothie kits: I label three freezer bags, then fill each one with enough frozen fruit for two servings per bag. I store them in the freezer.

12. Prep vegetables for tikka masala: I chop the cauliflower and carrots, which will be used for vegetarian tikka masala during the week.

13. Prep chicken marinade and freeze: I double the recipe for a maple mustard marinade, then transfer it to a freezer bag along with a pound-and-a-half of boneless chicken thighs. I’ll store these in the freezer and cook for dinner during week two.

14. Prep and freeze pork: Lastly, I slice the pork cutlets and store them in a freezer bag in the freezer. 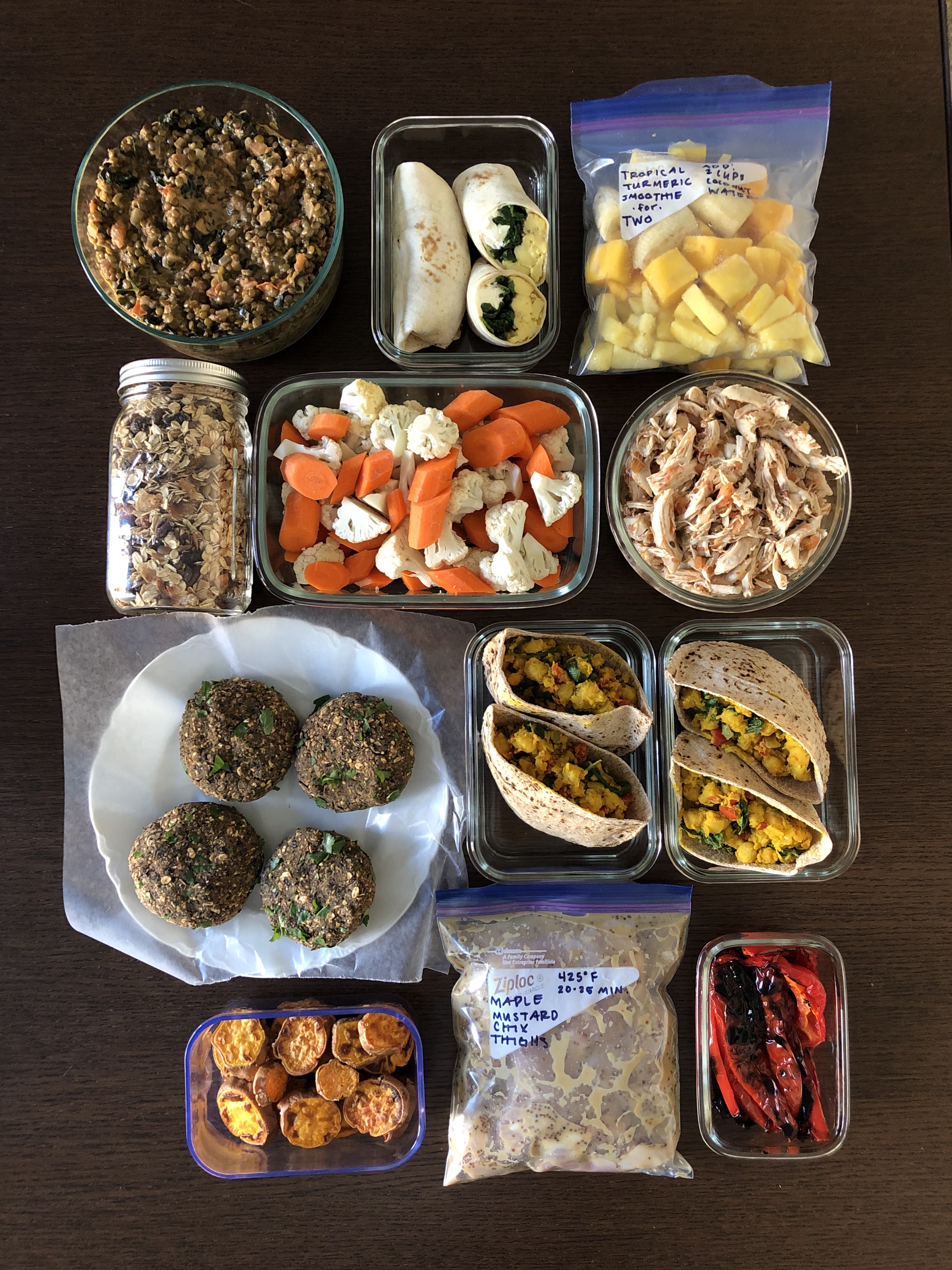 Breakfast: We alternate between muesli overnight oats, tropical smoothies, and spinach and feta egg wraps. If we plan ahead, we soak the muesli in milk the night before (otherwise we give it a shorter soak in the morning). Thanks to the smoothie kits, all that’s left to do in the morning is dump the bag into the blender with coconut water or cashew milk. We pop the egg wraps in the oven as soon as we wake up, so that by the time we finish our morning routine, breakfast is ready.

Lunch: We eat a mix of chickpea and veggie pitas (reheated in the oven for me, and the office toaster oven for my husband), sweet potato sandwiches, and leftovers.

Dinner: Follow this game plan for dinners during week 1.

(We have more Power Hour Meal Prep plans for all kinds of cooks and eaters! Check out all the plans we have so far.)

Power Hour Meal Prep is the series where we help you put it all together. We show you how to eat well during the week with an hour or two of Power Hour prep over the weekend. Every plan is different; mix and match to find your own personal sweet spot.