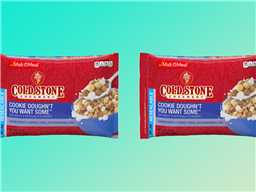 We’ve reached that special time of year where the jingle-jangle of ice cream trucks fills the air, offering a temporary oasis from the oppressive summer heat. Now, one of the biggest names in (indoor) ice cream sales is expanding its flavor arsenal to ensure that you can start your day with a super-sweet treat.

Just in time for summer, Cold Stone Creamery (not to be confused with Stone Cold Steve Austin) is releasing its new “Cookie Doughn’t You Want Some” cereal. Touted as a “naturally & artificially flavored cookie dough cereal,” it’s based on a real Cold Stone flavor which features “French Vanilla Ice Cream with Chocolate Chips, Cookie Dough, Fudge and Caramel.” The cereal version streamlines things a bit while trying to remain faithful to its frozen namesake. It works in crunchy cookie-dough-flavored cereal bits alongside marshmallows that presumably approximate French vanilla ice cream.

Cookie Doughn’t You Want Some is created in partnership with Post Consumer Brands as a sort of spinoff from their Malt-O-Meal cereal. It comes in a resealable 20-ounce bag for those who happen to have enough self-control to not eat the whole thing in one sitting.

It’s worth noting that this isn’t Cold Stone’s first foray into the cereal aisle. Last year saw them introduce Birthday Cake Remix and Our Strawberry Blonde flavored cereals, but the introduction of a new flavor suggests that their fusion of ice cream and cereal is here to stay. Cold Stone has a bit more competition this time around, as they’ll be competing with General Mills’ Drumstick Cereal for the attention of ice cream-loving cereal eaters.

Cold Stone’s latest creation is already rolling out at some storefronts and will potentially be available nationwide soon. So if you want to eat ice cream for breakfast this summer, you now have no excuse. Unless you need someone to come into your home, spread Cold Stone’s cereal all over your countertop, and mix it up for you. That probably costs extra.