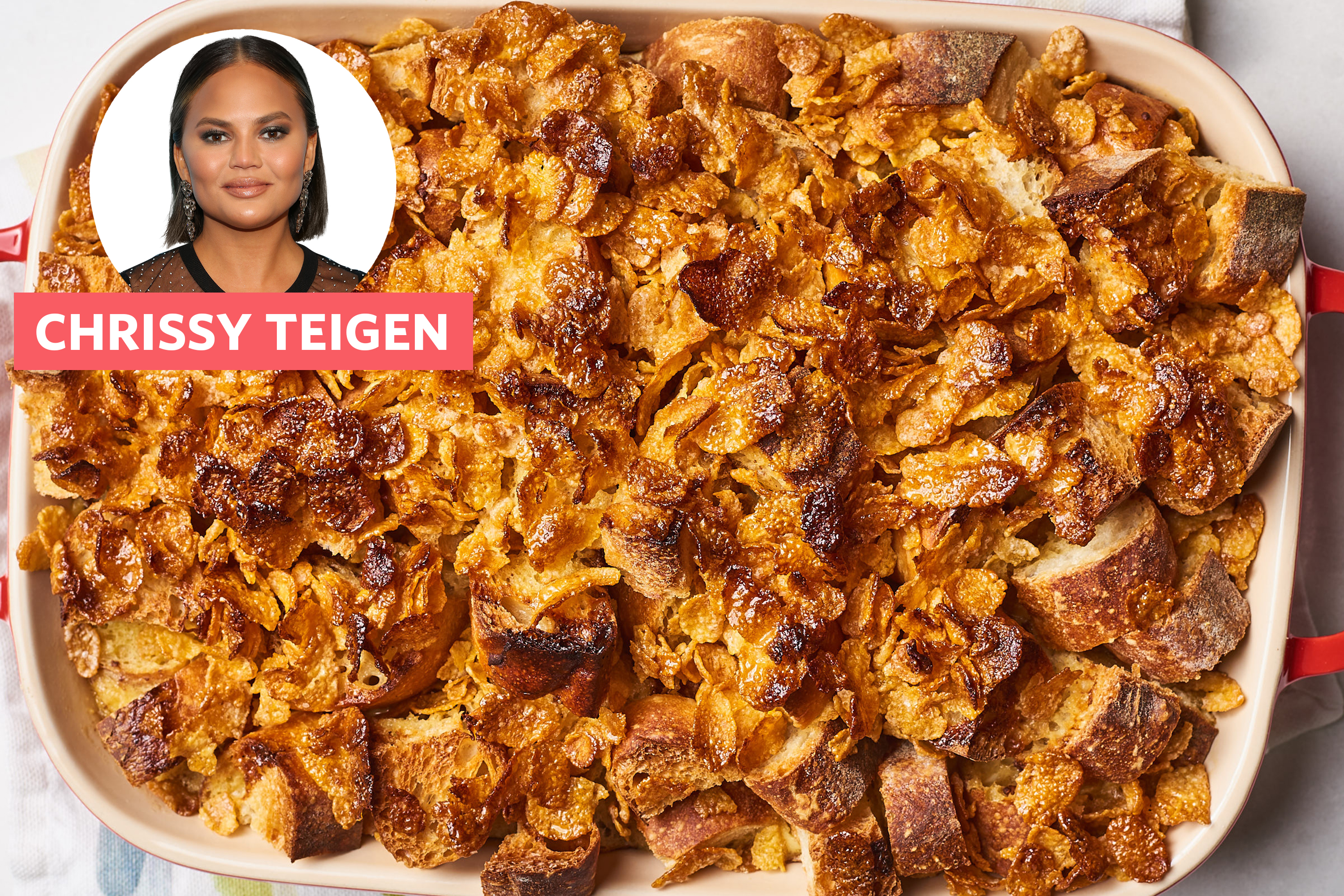 Chrissy Teigen has two top-selling cookbooks under her belt and a legion of culinary fans — so it’s fair to say that she knows a thing or two about the kitchen. Her recipes are smart and playful, just like she is, so when taste-testing four of the most popular French toast casseroles out there, I knew I wanted to try Chrissy’s version. (Spoiler: It’s topped with Frosted Flakes!) With a splash of rum and a box of cereal on the ingredient list, I wondered: Is this recipe just a gimmick or will it make breakfast the most joyful meal of the day? I went into the kitchen to find out. 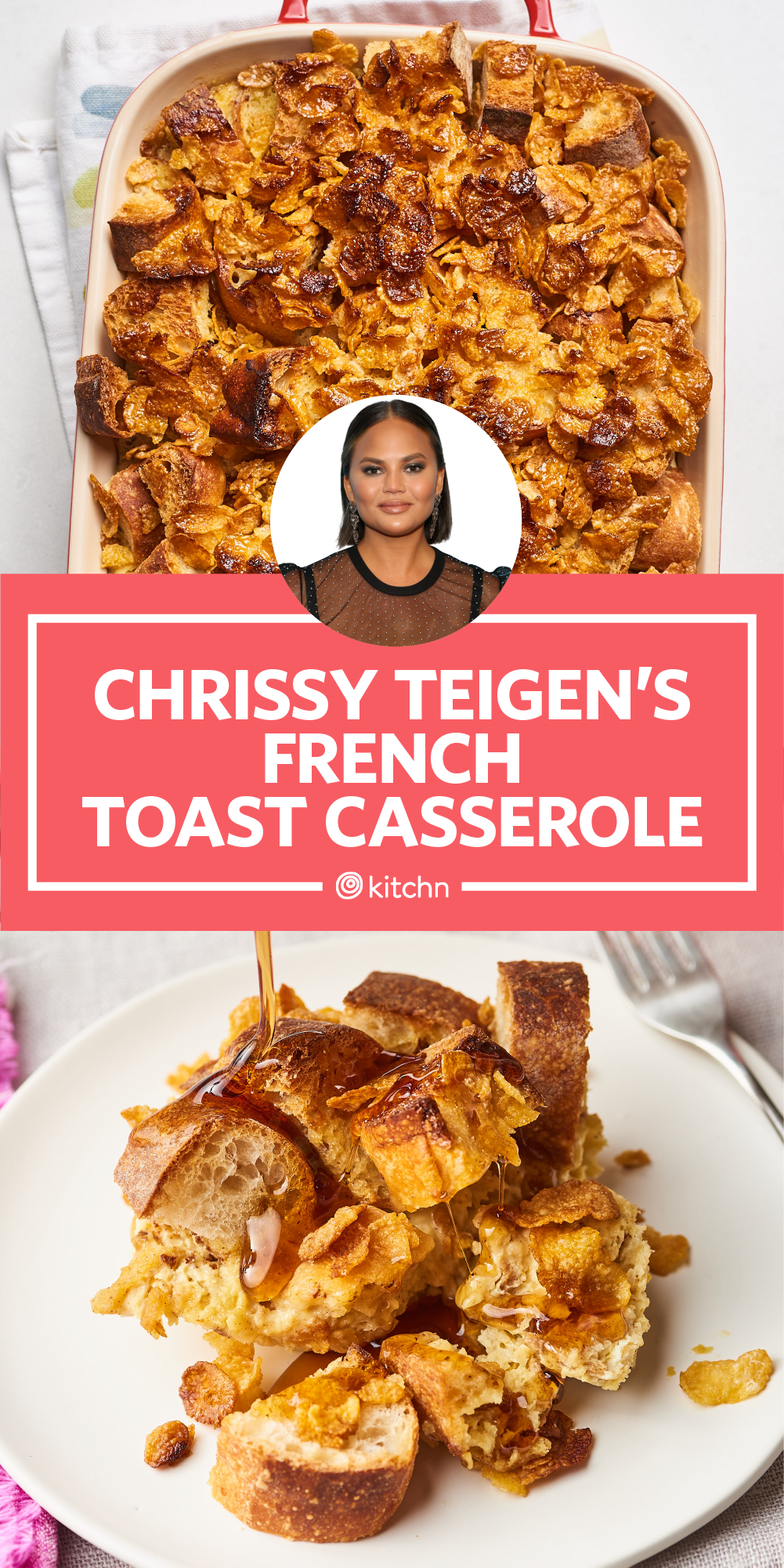 You’ll start by cutting a loaf of French bread into 1-inch pieces and arranging them in a buttered 9×13-inch baking dish. Whisk 8 eggs together, then add heavy cream, whole milk, dark rum, brown sugar, vanilla, cinnamon, freshly grated nutmeg. Pour the custard over the bread, press down to help the bread soak up the liquid, then cover and refrigerate overnight.

The next morning, Chrissy has you remove the French toast from the refrigerator and set at room temperature for 30 minutes to take the chill off. Meanwhile, mix Frosted Flakes cereal, melted unsalted butter, and salt together in a mixing bowl. Sprinkle the cereal topping over the casserole. Bake in a 350°F oven for 50 to 55 minutes or until the topping and top layer of bread is toasty and golden-brown.

What I Thought of Chrissy Teigen’s French Toast Casserole

I poured myself a rum cocktail one night, and kept that bottle by my side to flavor the custard of Chrissy Teigen’s French toast casserole. (Chrissy gives the option of substituting the liquor with something non-alcoholic — but I stuck to the rum for, you know, science.)

The custard here is great: It has the right proportion of dairy to egg, and it’s flavored with vanilla, cinnamon, and freshly grated nutmeg. Rum goes in, but the alcohol flavor burns off in the oven, leaving the custard with a lovely caramel flavor that none of the other three recipes that I tested delivered.

The topping is a mix of Frosted Flakes cereal, melted butter, and salt. With almost an hour in the oven, I feared the cereal would burn, but instead it caramelized and crisped. A major fault of many French toast casseroles is that recipes lean too heavily on sugar. The smart use of salt in the cereal topping here keeps the casserole from tasting cloyingly sweet — and it was a fun and clever throwback. I loved it. 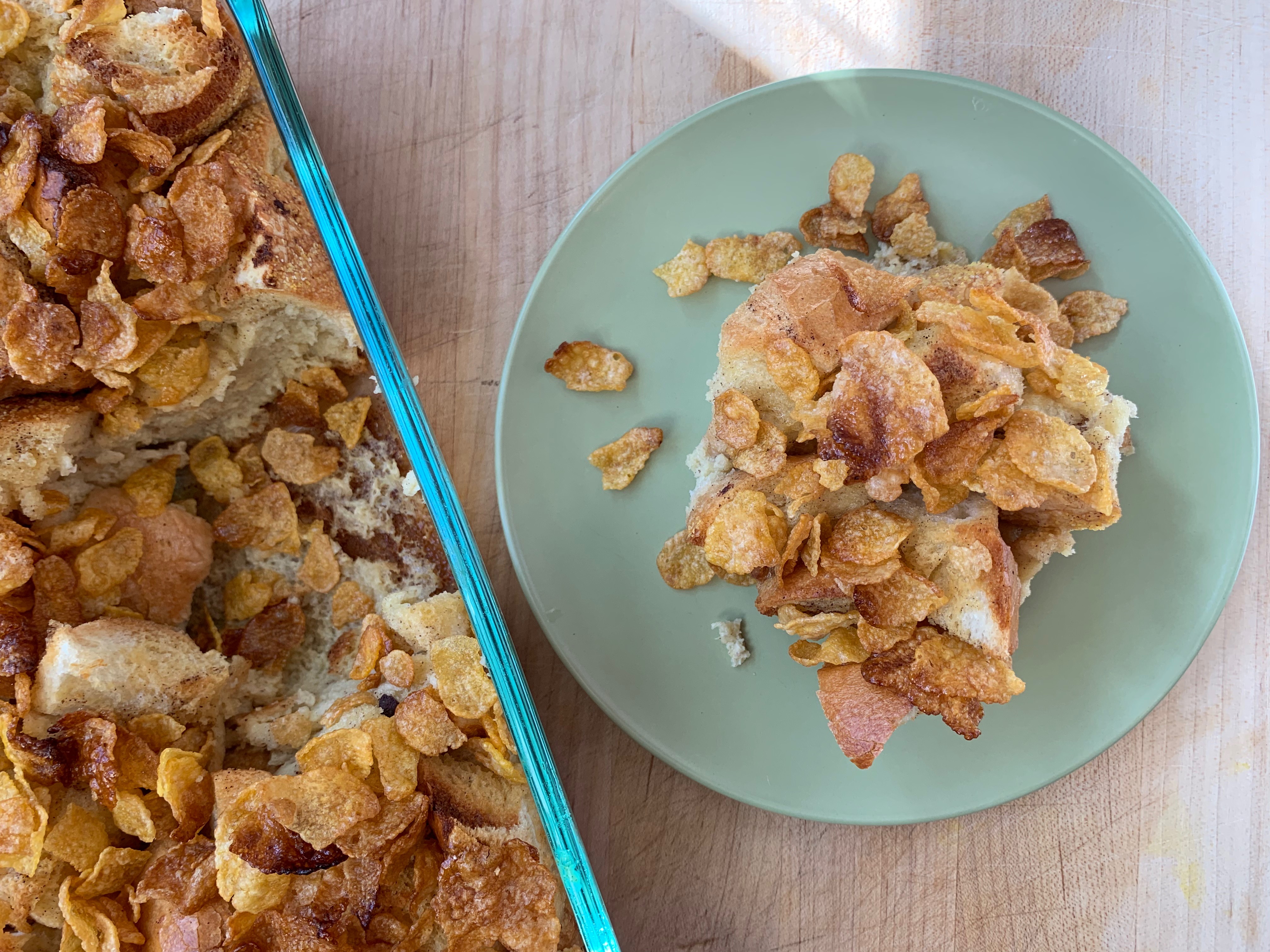 1. Tear the bread. Torn bread soaked in custard slices cleanly, while the angular edges of cubed bread remain distinct, tumbling off one another onto the plate. If you love crispy bits, keep the bread cubed; for a tender, custard-soaked texture more similar to griddled French toast, tear the bread instead.

2. You’ll feel like a kid again. This breakfast bake is pure joy to eat. Thanks, Chrissy, for giving me a reason to buy Frosted Flakes again.