Can of Chef Boyardee on Wheels Shuts Down Chicago Traffic 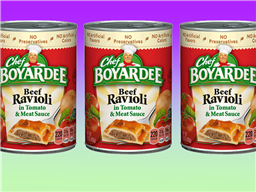 We live in a hypervigilant society, constantly on the lookout for anything remotely resembling a terroristic threat. The “if you see something, say something” mentality can help stop attacks before they materialize, but that desire to perceive anything out of the ordinary as inherently dangerous can also lead to comical instances of overreach. This is a story about the latter situation.

This week, Chicago’s police department shut down the 200 block of State Street after tactically ascertaining a suspicious object in the roadway. Was it a bomb? A large shipment of drugs that someone had left behind for some reason? No, it was not either of these dangerous things. It was, in fact, a can of Chef Boyardee attached to skateboard wheels and painted to look like a racecar.

For an unspecified period of time, Chicago PD officers closed off the street to automobile and pedestrian traffic while they sorted out the situation. Officer Michael Carroll, a Chicago PD spokesman, said the decision to do so was made “out of an abundance of caution” according to Block Club Chicago.

After speaking with a DePaul professor and nearby students, they were eventually able to confirm that the rolling ravioli was a student project that ultimately posed no threat. Once the internet (rather quickly) realized this thing wasn’t a bomb, the jokes started flowing.

Though this seems like this was just a harmless misunderstanding, Chicago PD didn’t see it that way. According to the police, the student was ticketed for disorderly conduct and breach of peace, and he’s scheduled to appear in court on June 10th.

It’s easy to dunk on the cops for stopping traffic while they dealt with a can of ravioli, but they have a point. If you stop and think about Chef Boyardee for more than a second, it is kind of suspicious. I mean, how can meaty pasta sit in your kitchen cabinet for so long and still be edible? Now THAT is a mystery begging to be solved.