The Most Ridiculous Drinks Customers Have Ever Ordered at Dive Bars, According to Bartenders 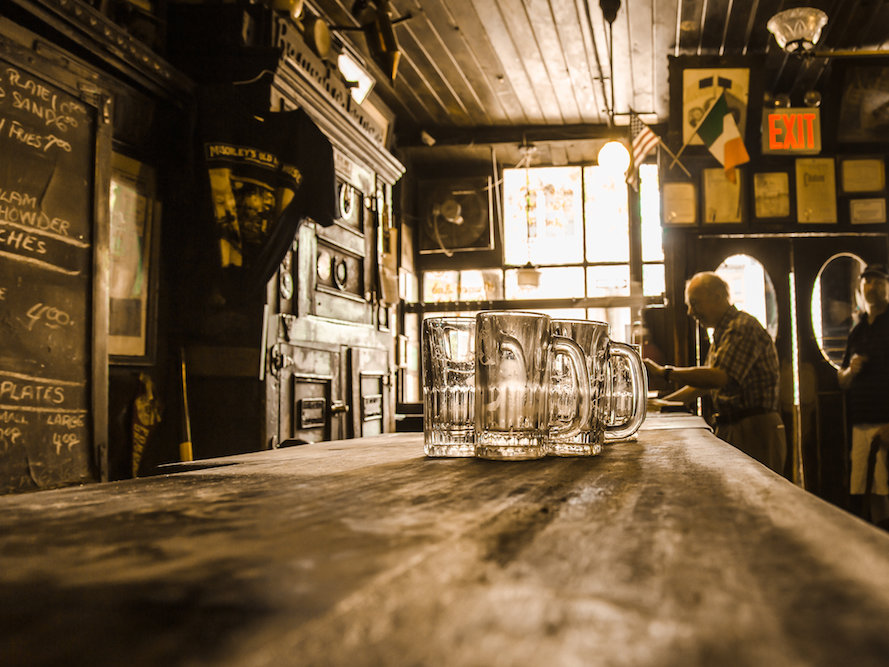 Posted at the bar at McSorely’s Old Ale House—a New York City institution known for its decidedly limited list of just two kinds of beer—my husband overheard a woman ask the bartender what kind of cocktails the dimly-lit saloon offered.

The scene begged the question of why anyone would look at McSorely’s—a dive bar by any standard, with peanut shells strewn on the floor—and think it would offer a full cocktail menu, let alone why a bartender wouldn’t laugh at someone’s request for something like a lemon drop. Yet, we knew this poor woman couldn’t be alone in her ask. And so, we asked a few other bartenders: What are the most ridiculous drinks people have ever ordered at dive bars? Here’s what they all had to say.

“A short ride in a fast machine.”

As one former dive-bar bartender, In Good Company Hospitality’s cocktail curator Will Benedetto, recalls, “I was working at a dive bar on the Lower East Side. We were slammed, mostly with NYU students. Somebody came up to the bar and ordered a drink—but rather than saying a word or two-word drink, like ‘Tom Collins’ or ‘Old Fashioned,’ she said something like, ‘I’ll have a short ride in a fast machine.’

“I asked her to repeat the order. She did. We stared awkwardly at each other. I apologized and told the guest that although that is a lovely John Adams tune, I’m not sure what it has to do with a drink order. The guest then scrolled through her phone for ten minutes while I threw vodka sodas and domestic beers at a frenzy of tipple-craving coeds, until she thrusted her phone in my face. Sure enough, some celebrity chef on the West Coast had this cocktail on their menu. It involved a duck-fat washed gin, Vermouth caviar and something called ‘sea foam.’ When I explained to her there was no way I could make that drink behind that bar on that night, they huffed and ordered a screwdriver with no orange juice and a splash of seltzer.

“Why would you think a dive bar has gins fat-washed with exotic meats, caviar anything, or sea foam? Also, who the hell orders the simplest drink in the world like that?”

“A Sex and the City-inspired cocktail.”

“Most of my great bartending stories come from my days at Niagara in Alphabet City in the ’90s when Sex and the City was first on,” says John Bush, partner of Three Kings Restaurant Group and former dive-bar bartender. “The show would make up a drink every week—the Tartini, the Sextini, the ‘Make a Woman Gasp’—and like clockwork, a group of women—or men—would come into the bar the following week and order that made up drink. If we were in a good mood, we would just make something up. But if we were not in the mood or the bar was particularly busy that night, we would shrug it off and say ‘never heard of it.’

“The patrons would get really, really mad. It was the worst—to this day, my skin crawls every time I hear any word ending in ‘tini.’ But besides that, I’ve always been surprised by people asking for Banana Daiquiris in dive bars. Was it ever a popular drink?”

“Anything in a coupe glass.”

“I’ve had people ask for a ‘frozen pina colada with an umbrella and two cherries, please,’ and I’ve thought, ‘Well, sure, since you said please, I’ll go grab some fresh coconuts and my mom’s blender. BRB.’ But a personal favorite of mine is when someone shows you a picture of another bar’s menu or even a photo of a drink and says, ‘Can you make this?’ Sure, those colors really help. And of course we have house-made turmeric matcha hibiscus syrup.”

“A Miller High Life—with a sock.”

“The craziest thing that was ordered from me wasn’t something obscure,” recalls Kevin Mabry, a former dive-bar bartender and beverage director at Capo. “It was a tall boy of Miller High Life and my sock. I kid you not. An older gentleman, who looked like he could have been cast as a wildling in Game of Thrones, came in and ordered ‘a burger, medium rare, no pickles, one of those cold-ass High Lifes you got—and your sock.’” Yep, a sock.

“’You want my sock?’ I asked in the most bewildered of voices with a hint of curiosity. And he said, ‘You got the coldest beer in town and no cozies. So I’m going to need your sock.”

“At this point, all hell has broken loose. I lost my composure. Laughed in this guy’s face,” says Mabry. “The moment I realized he was serious is the same fleeting moment I almost considered giving him my sock. It was still early in the shift. It was actually an afternoon shift because I distinctly remember wishing other people were around to witness this. I hadn’t been wearing the socks for too long and new they were still fresh—and then my better judgment kicked in and I gave him a Crown Royal bag stuffed with some napkins.”

“A salad in a high-ball glass.”

Before Bonnie Wilson became the CEO of BBB Cocktail Creation Services and a mixologist at Cocktail Artist, she worked as a dive-bar bartender in Dallas. “It was a hole in the wall, in a weird part of town, and we had a lot of regulars that lived very eccentric lifestyles,” she describes. “We had a guy who liked to research crazy things on the internet and ask us to use them in cocktails. Things he asked for included: beets, curry, turmeric, starfruit, dragon fruit and using chickpea juice instead of egg whites—all sorts of things, none of which we could do because it was a divey little bar with no kitchen. We would just laugh at him and tell what we would do if we had the ingredients—and then he’d order a vodka soda and be happy.”