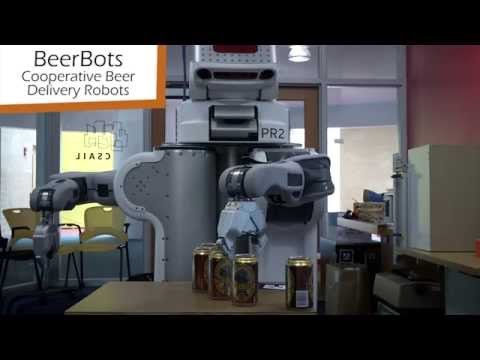 For those of you who think that college students are nothing more than a bunch of beer-obsessed party animals hiding behind a thin veil of “education,” it turns out you’re right. Even those supposed tech geniuses at MIT are doing nothing more than building beer-serving robots!

A team at MIT’s Computer Science and Artificial Intelligence Laboratory built what they have dubbed “Beerbots”—a three-machine team of “cooperative beer delivery robots.” Though their bartending or serving skills don’t mimic those of Tom Cruise from Cocktail—these robots basically just shepherd cans from one spot to another—what’s unique is their ability to navigate a space and take and deliver orders, all without duplicating orders or, you know, crashing into each other in a giant fireball explosion.

“You can take some robots, take some smart people and engineers, and make something really nice and work quickly and efficiently especially in the multi-robot space. The problem is that doesn’t generalize well,” MIT’s Ariel Anders says in the video above. “This work tries to pose the problem in a more general framework that given what we call ‘macro-actions’ you could use the planner that we have to go out and solve a problem.”

Um, OK. While you do that, how about you get one of them bots of yours to bring me a few brews?