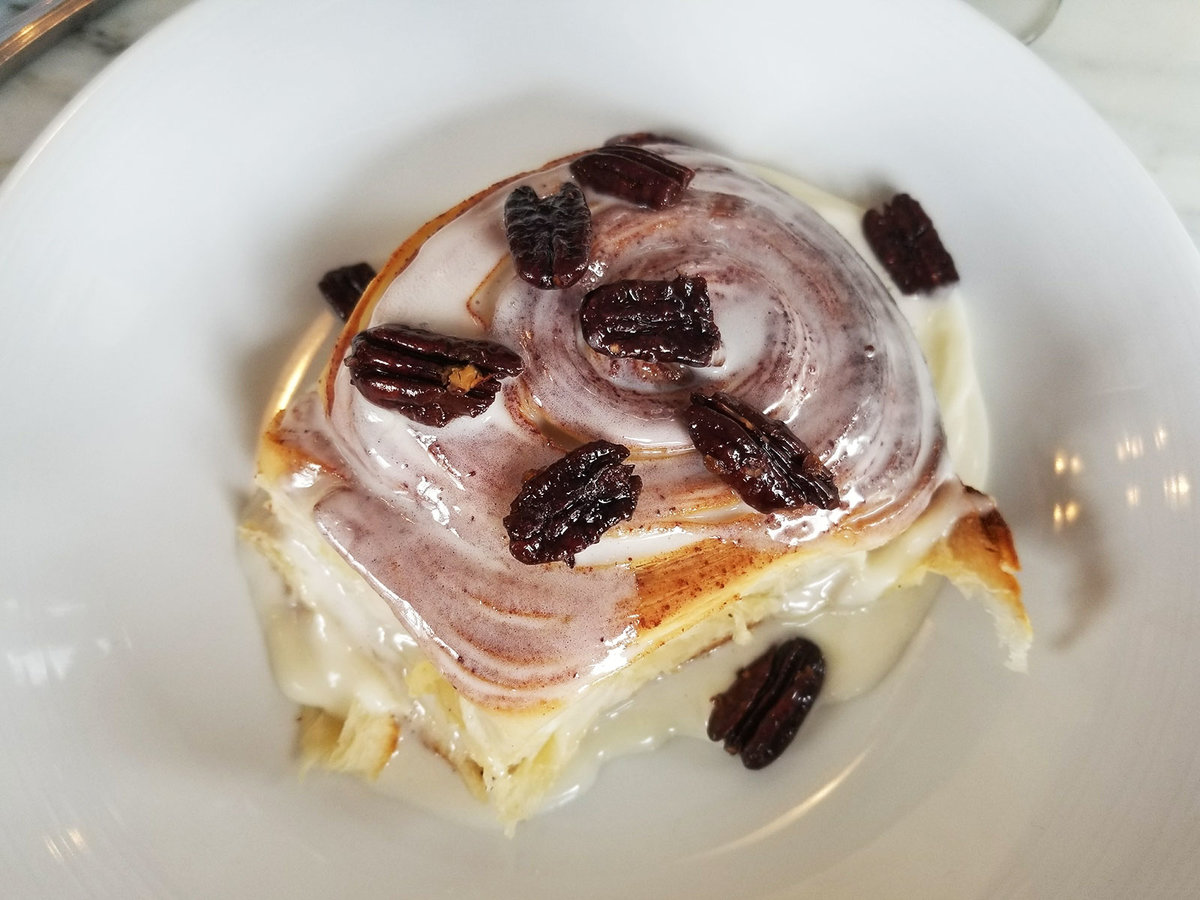 Cinnamon rolls, you know. Everybody does, right? Plenty will have also tried variations on the American breakfast classic—for example, its trouble-making cousin, the croissant-style cinnamon roll, layer after layer of butter making already slightly ridiculous thing even more, well, ridiculous.

Chef Jason Goodenough, of local brunch favorite Carrollton Market in New Orleans, happens to think that rather than choose between styles, your best best is to fuse the two—a traditional bread dough, and a laminated dough—together.

The result can be found on the restaurant’s brunch menu (offered Thursday-Sunday), a balanced, breezily decadent winner that, in true New Orleans style, makes up for being slightly less indulgent by being twice, or perhaps three times larger than necessary. Just so you remember where you are.

How does it all work?

“We start with the same base as our regular yeast dough—a Parker House Roll dough that we found is pretty flexible,” says Goodenough. “Instead of proofing it and punching it down, like we normally would for our rolls, we go straight from the mixer to the table, let it rest for about twenty minutes, then we roll it and do an old school lamination.”

And that’s where things get real fun. (And really involved.) In goes the butter, followed by four folds with thirty minutes between them—much like a puff dough, or a croissant dough—before rolling it all out and giving it the traditional cinnamon roll treatment.

Following an overnight proof, the rolls are baked until golden brown, then topped with a simple glaze, made from confectioners sugar and heavy cream. (Goodenough likes to top them off with pecans, fried and candied in a double-strength simple syrup, if you’ve got time.)

The result? A restrained, almost-delicate, brunch must. At $7 and perfect for sharing (no, really, it’s big enough), the cinnamon roll is the perfect compliment to one of the more popular brunches in New Orleans right now.

There’s a reason for that—Goodenough’s classical technique and flair for precision lends a casual elegance sets it apart from much of the local morning fare; a memorable rendition of biscuits and gravy, for example, starts with biscuits made from corn meal, bathed in rich oxtail debris and crowned with perfect poached eggs and a bright hollandaise. Just in case you have any room after that cinnamon roll.